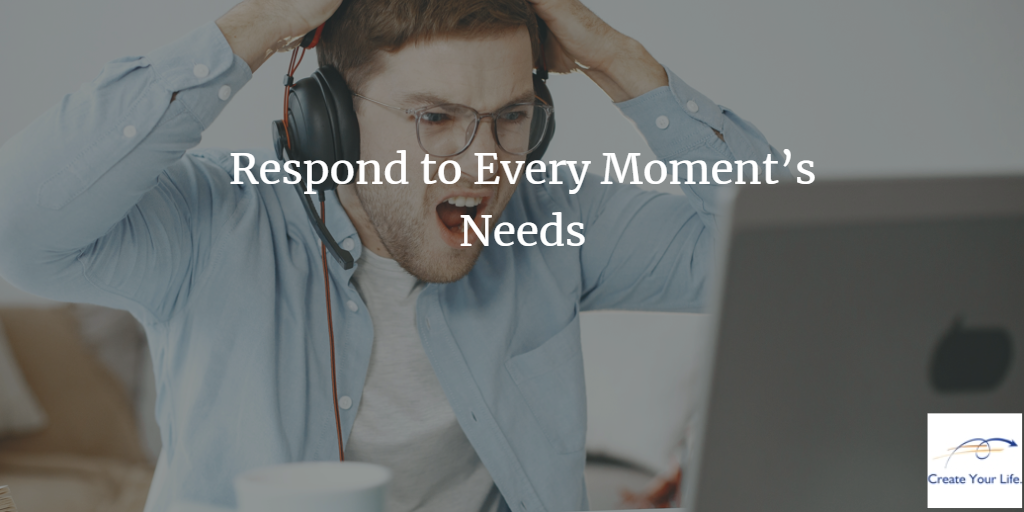 Oh, those pesky annoyances that need our attention but that we put off. Some are minor irritants. Some are more serious and some could have a deleterious effect on our health, safety, wealth, or relationships. But we can find ways to respond to annoyances rather than ignore them or tolerate them.

Someday, I’ve Got To Fix That!

When the alarm clock rings, I hop out of bed and jump in the shower. As I adjust the water temperature, the loose shower handle comes off in my hand. Again. I am drenched with cold water. Again. Me: “Someday I’ve got to fix that.”

After putting on my unfavorite shirt, which is at least clean and has all its buttons, I prepare breakfast. But my old cranky toaster burns the toast. Again. I eat burnt toast. Again. Me: “Someday, I’ve got to get a new toaster.”

As I’m driving to work, I hear metal on metal screeching when I apply the brakes. Again. I turn up the volume on the radio. Me: “Someday I’ve got to get those brakes lined.”

At lunch, I pull out money to pay the bill. I need a new wallet, so right now I’m carrying everything loose in my pockets – cash, driver’s license, credit card, etc. All my stuff spills out over the counter and onto the floor. I sheepishly grin at the cashier and say, “Someday, I’ve got to get a new wallet.”

And so it goes during the rest of my day. Little annoyances – and some not so little – that I put up with and put off till later. At the end of the day, I drop into bed exhausted, my energy used up by dealing – or I should say – not dealing with all those pesky irritations.
. . .
Now, I admit this story has been inflated a bit for dramatization, but there was a time in my younger days when that stuff could have happened and did. Perhaps not those exact details, but at that time, I let a lot of “unimportant” things go; I put up with them rather than deal with them. I wasn’t good at responding to annoyances.

Oh, those pesky tolerations – the things that need our attention but that we put off to deal with at some other time.

Some are minor irritants: the dripping faucet, the cluttered garage, the junk e-mails we keep meaning to unsubscribe from.

Some are more serious: the shaky banister on the stairs, the front door that sticks and won’t lock, the friend who frequently “forgets” his wallet when it’s time to pay for lunch.

And some could have a deleterious effect on our health, safety, wealth, or relationships: the check engine light that keeps popping up, the credit card debt that we haven’t mentioned to our spouse, that odd-looking spot on our head that the dermatologist needs to examine.

Some we overlook, telling ourselves we’ll get to those “someday”. Some we eventually deal with when they become impossible to overlook. Few of us, though, handle the annoyances, irritations, or tolerations when they first arise. But maybe there’s something we can do about that. Maybe we can find ways to respond to annoyances rather than ignore them or tolerate them.

Why Is This Important?

So, some of us might ask, what’s the big deal? Where’s the harm in not dealing with a minor irritant? While we may not realize it at the moment, when we don’t respond to annoyances we open ourselves up to potential problems.

We’ve discussed a number of times in past conversations the process for dealing with tolerations. See here or here, for example.

However, you likely already know what to do and possibly you know how to do. Let’s think for a moment about the why to do and reasons you may not be dealing with your stuff.

Remember this? I->A->F not F->A->I. That’s shorthand for Identity -> Action -> Feelings NOT Feelings -> Action -> Identity. We want to choose our identity, act based on that identity, and let our feelings flow from our actions. If you only deal with things when you feel like it, and don’t if you don’t, your identity is shaped by how you feel . . . not a good plan.

“Our behavior is controllable in a way that our feelings are not,” writes David K. Reynolds in Constructive Living. “The mature human being goes about doing what needs to be done regardless of whether that person feels great or terrible.” [Reynolds] It’s best to decide who you want to be, what identity you want, then act based on your identity. Feelings follow from your actions and they are likely good because you’re acting as the person you say you are. There is congruence between identity and behavior.

Sometimes we don’t deal with annoyances because we think we don’t have time, and surely, as we discuss over and over, you don’t have time to do everything you desire to do. But you’ll have to deal with most annoyances sooner or later unless they are truly things you can let go of.

Just as it’s cheaper to deal with a minor issue before it becomes a big problem, it usually takes less time as well. Dealing with small issues and the relatively smaller amount of time it takes keeps them from growing into major time-consuming problems.

If it is truly a minor irritant that’s never going to get any bigger or any worse, it’s OK to accept it and let it go. However just because it isn’t important now doesn’t mean it won’t become a major inconvenience or worse.

Think of a minor electrical problem that results in a burned-up house, a seemingly insignificant disagreement that grows into a fractured marriage, a tiny health issue that mushrooms into a catastrophe.

And it doesn’t even have to be a disastrous outcome. Many minor irritants can grow into major problems. You can pay a little now (in money, time, and effort) or pay a great deal later, and the later usually comes with much more pain and trouble.

Then again, sometimes maybe you don’t know how to do. I find inspiration in a story about her mother that Marie Forleo tells in her book, Everything Is Figureoutable. Marie tells about a time she came home to find her mother up on the top of their two-story house, patching the roof. Another time, she came in and her mom was in the bathroom, “surrounded by tools and exposed pipes,” as she retiled their bathroom. Finally, when she walked in and her mother had her radio spread out in pieces on the table, she asked, “Mom, how do you know how to do so many different things?” Her mother’s reply: “Nothing in life is that complicated. You can do whatever you set your mind to if you just roll up your sleeves, get in there and do it. Everything is figureoutable.” [Forleo]

When I need to address something but I’m not sure how to start, I slow down. I observe. I take the first obvious step. Then the next. Usually, I’m able to figure out the solution, and frequently it’s easier and faster than I imagined.

But not always. Sometimes it’s difficult and takes a long time. Still, most of the time I eventually figure it out. Taking it slow and staying observant is the key. (And those YouTube “How To” videos never hurt!)

Just start. Everything is figureoutable.

Note that Maya Angelou didn’t say “Wait until you know how to do everything perfectly.” No. When you can do more or do better, do that then. But right now – do what you can do.

A Plan For Responding To Annoyances

So, let’s make a start at responding to some of the annoyances we’re facing.

Get out your notepad and write down 10 annoyances you are putting up with. This should be easy as Talane Miedaner, life coach and author estimates that most of us have from 60 to 100 things we are tolerating. [Miedaner] Go ahead and do it now. I’ll wait.

Got it? Good. Examine each item. Why are you tolerating these things? Is it that you don’t feel like doing it? You don’t have time? It isn’t important? You don’t know how to deal with it?

Now, look at each item and your reason for not dealing with it.

You don’t feel like it. Remember, to embrace an Excelerated Life™ we follow the assertion = I->A->F NOT F->A->I. We decide our identity, what and who we want to be, then act based on that identity. We don’t wait till we feel like doing it; we do it now. Because that’s who we are.

You don’t have time. I talk a good deal about the fact that you’ll never have enough time to do everything so you must focus on the 2 or 3 most important things. But . . . these niggling annoyances drain your energy and resources. Take the few minutes, or 1/2 a day, or whatever you need, and plug these energy drains. You’ll be able to focus on your other important tasks much better.

It isn’t important. Again, it may not seem important but if it is slowly draining away your time, energy, or money, then it’s impeding your ability to focus on the things that matter. That seems important enough to do something about it.

You don’t know how. Remember, everything is figureoutable. At least give it a try. You’re likely to surprise yourself. Naturally, if your water heater needs replacing or you have some other major repair on your list, it may be wise to consider hiring a professional. But we’re mainly talking about petty annoyances today.

Responding to the Needs of the Moment

“It’s in the responding to every moment’s needs, regardless of success or failure, that we mature.” ~ David K. Reynolds

If you have annoying tasks, situations, or people you want to deal with but you need some direction, try here. You must know what (specifically) you need to deal with. Chances are you already do. If not, make your list as noted above.

Then address the why. Think of the necessity of plugging your energy drains, physical, emotional, and spiritual, and the drain on your other resources. Keep David Reynold’s words in mind: responding to the needs of the moment is how we mature. It is also a part of embracing your Excelerated Life™!

Do you tend to ignore annoyances until they get too big to overlook?
Or do you deal with them when they come up?
Share your experience by leaving a comment below.

Excelerated Response™ – dealing with the things you’ve been tolerating – is one step in creating your Excelerated Life™, a life of flourishing and well-being, and a life of meaning, purpose, and service.