“When we try to change our behavior, we strategize about our motivation and self-control. But what we should be thinking about instead is how to set up new habits. Habits persist even when we’re tired and don’t have the energy to exert self-control.” ~ Wendy Wood [Life: Wellness]

The Parable Of The Threads

A father gave his young child a thread and directed her to break it. This she did easily.

The next day, the father wound two threads together and asked the child to break the pair. Again, she easily broke them.

Each day, the father added a thread — on the third day, three; on the fourth day, four; on the fifth day, five — and gave them to the child to break. Each, day the child broke the threads effortlessly.

Then, at about day number 14, it became harder for the child to break the threads. Each day, as another thread was added, the task of breaking them grew increasingly difficult. Finally, by the end of the third week, the child could not break the strand of threads.

“My child,” said her father, “such is habit. When you first begin, a habit is easily broken. But as you repeat it, day by day, it becomes harder and harder to break. Eventually, the habit grows so strong, it is nearly impossible to change it.”

Have you ever considered how much of your behavior is habitual? Scientists estimate that about 40% of our daily activities are performed by habit.

In general, we have an intention and we behave in accordance with that intention. We want to have healthy teeth and gums so we brush and floss our teeth. We want to look (and smell) nice, so we shower. We want to be on time for an appointment, so we leave our house in time to get where we are going prior to the appointed time.

The behaviors could be negative, and detrimental to what we say we want. We want to be healthier, but we choose to watch TV instead of going for a walk. We want to get sufficient sleep, but we stay up late surfing the internet or playing computer games. We want more family time, but we are addicted to our smart phones.

Each day, as you perform the same behaviors, you add a strand of thread to the collection. Eventually, you don’t even think about the original intention. You simply perform the behavior. As the mass of threads become thicker and thicker, the habit becomes harder and harder to break.

Because these behaviors are automatic, we often perform them unconsciously. (Think about the times you have arrived at a familiar destination and you don’t remember the actual drive to the place. You just “wake up” and you are there.) As we said earlier, these may have begun as intentions based on a specific result you were after. Even if your original intentions have changed or are no longer relevant, you continue to perform the same actions time after time.

Now, habits are important. They make much of life simpler and easier. What if you had to think about and decide every activity you undertook throughout the day?

“There is no more miserable human being than one in whom nothing is habitual but indecision,” wrote William James, “and for whom the lighting of every cigar, the drinking of every cup, the time of rising and going to bed every day, and the beginning of every bit of work, are subjects of express volitional deliberation. Full half the time of such a man [or woman] goes to the deciding, or regretting, of matters which ought to be so ingrained in him [or her] as practically not to exist for his [her] consciousness at all.”

Habits are powerful. Small actions, taken consistently over time, compound into massive improvements. Or into decline and languishing.

Changing From Bad To Good

Wendy Wood is a professor of Psychology and Business at the University of Southern California in Los Angeles. Her research concentrates on how we form and change habits, as well as ways we explain habitual behaviors.

According to Dr. Wood, there are three main principles [Science Daily] to consider in order to effectively change habitual behavior.

First, you must disrupt the existing habit and create the space to choose a different behavior in line with your new intentions. As we have discussed before, we are learning more and more how habits and other behaviors are tied to environment. If you can change your environment in a way that supports the new behavior you want to acquire or disrupts the old behavior you want to drop, you are likely to be more effective at making the change.

If you want to eat less junk food and more healthier foods, place the cookies or chips or other unhealthy snacks out of reach at the back of the cupboard or on a high shelf. (Or better still, don’t bring them into the house — leave them at the store. Make the choice once instead of having to make it multiple times during the day.)

Dr. Wood’s second principle for forming new habits is that repetition is fundamental. The old knowledge that it takes 21 days to form a habit has been proven incorrect. Studies now show that it can take anywhere from 15 days to 254 days to instill a new habit, based in part on how complex or difficult the new behavior is and in part on one’s personality.

For example, a British study looked at how long it took for participants to learn a new habit, for example, jogging every day. They found that the average time was 66 days, but individual times varied from 18 to 245 days.

The point here is that it is likely going to take a good amount of time to install a habit. The trick is to be as consistent as possible in repeating the behavior every time you encounter the cue.

The last requirement for forming a habit is that there must be “stable context cues” to trigger the new behavior. Dr. BJ Fogg, a behavioral scientist at Stanford, calls them “anchors” – an existing routine or habit to which you can tie the new habit.

Here are some ways to cue new habit behavior:

o Tie the desired behavior to a trigger, an action you already do.
Example: After I brush my teeth, then I floss.

o Use a distinctive visual cue to trigger the behavior.
Example: Set your gym clothes out the night before where you’ll see them 1st thing in the morning.

o Use implementation intentions – When situation X occurs, then I will perform response Y (the habit behavior).
Example: When I see the candy dish on Paula’s desk at work, I will remember the healthy snack I have at my desk.

Interestingly, reversing the cue and the behavior doesn’t work as well . . . for example, deciding to floss before brushing. It is important to have the cue come first.

A Habit Exercise: An Exercise Habit

Suppose you want to create a habit of exercising every morning. Your current habit is to hit the snooze button a couple of times, then reach for your phone to catch up on e-mail and the latest social media posts. You want to change this behavior such that you bounce up out of bed and go for a brisk walk first thing.

To start, change your environment. Put your phone in a drawer or in another room, out of arm’s reach. Then move your alarm across the room so that you have to get out of bed to turn it off.

Next, set up an external cue, tied to an existing behavior. Put your work out clothes and shoes in the bathroom, where you’ll see them when you go in there.

Finally, make the behavior small enough that you will do it every day. Don’t try to start by walking a mile if you’ve been sedentary for years. You may start by walking to the end of your driveway. But commit to doing it every day. If it’s raining, you do it. If it’s 28 degrees, you do it (with coat, hat and gloves, of course). If it’s 101 degrees, you do it (without the coat, etc.). If you didn’t get up on time and you’re going to be late for work, you do it.

This is extremely important to get your momentum building. It will be difficult at first and you’ll come up with all kinds of excuses. Persevere. Get out and walk every day – eventually (not necessarily in 21 days remember), the behavior becomes easier and easier. You can gradually add distance to your walk as it becomes more habitual.

1. Select a positive behavior you want to make into a habit (or to replace a negative habit).

2. Make the necessary changes to your environment such that it is as easy as possible to perform the new behavior.

3. Select an existing habit to use as an anchor to cue the new desired behavior.

4. “Resolve to perform what you ought; perform without fail what you resolve.” ~ Benjamin Franklin

Nearly half of our actions throughout the day are automatic and habitual. Most of these we perform without conscious thought. Yet they go a long way toward how we live our lives. They affect our health, our wealth, our relationships and go far in determining our success or failure.

The good news is, you can harness these habitual behaviors and have them put you on an upward spiral. You can, with thought and effort, make success a habit. And that is embracing the Excelerated Life!

Excelerated self-discipline — doing what you say you will do — is one step in creating your Excelerated Life, a life of flourishing, of well-being, meaning, and purpose. 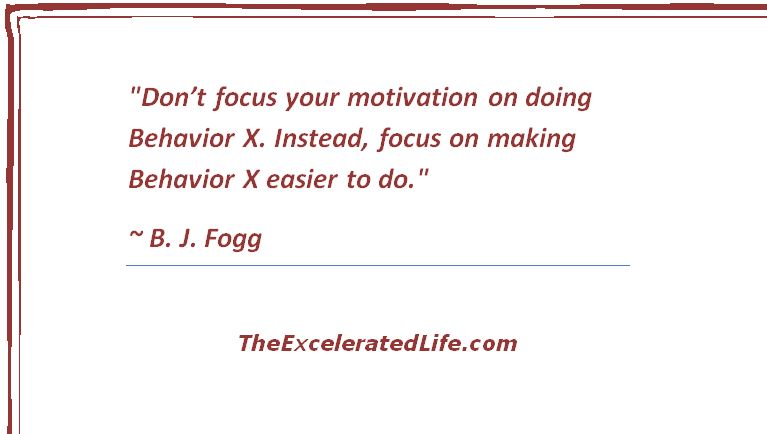