“’Someday’, you said you’d do it yesterday; Yesterday, you said you’ll do it today. Today, if you push it to tomorrow, it’s likely tomorrow, you’ll shift it to ‘Someday’! Do it now!” ~ Israelmore Ayivor

A mountain climber was ascending a high peak, where he had been told the views were amazing. He began his climb in high anticipation of reaching the top.

The climber hadn’t gone far when he came upon an unusual rock that attracted his attention. He decided he wanted to study the rock more later, so he picked it up and put it in his backpack. He climbed a bit higher and saw another rock, even more interesting than the first. So he picked that one up too and put it in his backpack to examine later. This same thing happened again and again. The climber found more and more rocks and other objects he wanted to inspect later and stuffed them in his backpack.

As you might surmise, the mountain climber’s pack grew heavier and heavier with each object he stowed away to deal with later. Eventually, although he was no more than half-way up the mountain, his pack became so heavy that he was too exhausted to continue. He turned around and started back down, never experiencing the beautiful vistas from the peak.

There Is No “Later”

The late Peter McWilliams, author of such best selling books as Do It! Let’s Get Off Our Buts, Life 101, and You Can’t Afford The Luxury Of A Negative Thought, once wrote “The biggest lie we tell ourselves . . . is ‘I’ll do it later'”.

I’ve often said jokingly that procrastination is one of my spiritual gifts. But really, putting things off till later is no joke. Procrastination results in missed opportunities, undeveloped projects, lost jobs, lost loves, and no chance to see the beautiful views from the top of the mountain.

Don’t keep adding rocks to your backpack thinking you’ll get to them later. Do it now.

In one of his “Darren Daily” morning talks, Darren Hardy tells about one of his friends, Marc Sparks. Marc is a successful entrepreneur. He has started and sold a number of businesses for millions of dollars. In this video, Darren talks about “Sparks Speed” — the technique his friend uses to deal with important matters right away.

For instance, Darren relates a story about a business deal he and Marc were involved in with a TV network. The two met with network executives and discussed the project they wanted to do. Immediately after the meeting, Marc began their proposal. They completed the full proposal at the airport and e-mailed it to the executives before their plane took off. The TV executives had the complete proposal within hours after the meeting . . . something that would normally take 5 to 10 days. This is what Darren means by “Sparks Speed.”

Create The “Do It Now” Habit

Stop putting things off till later and begin creating the habit of doing it now. How can you become more rapidly responsive? Here are some suggestions to get you started.

Use the TRAF method.

TRAF is an acronym for Trash – Refer – Act – File and is typically used for handling papers and documents. When you pick up a piece of paper, you decide right then to either Trash it, Refer it to someone else (i.e., delegate it), Act on it, or File it for future reference.

You can use TRAF for handling other tasks as well. When you “pick up a rock”, don’t simply put it in your backpack for later. Decide now – trash it, refer it, act on it, or file it.

Often, the thing that keeps us from getting to important tasks is all the other things clamoring for our attention. The internet has raised distraction to an art form with e-mail to check, news sites to keep up with, Facebook, YouTube, and on and on.

Define “deep work time blocks” when you will concentrate on your priority task or goal. Make these blocks of time sacrosanct.

Change the settings on your computer to make it harder to distract yourself via the internet. For example, turn off your e-mail alert and check e-mail on your own terms, a few times a day. Clear your cookies so you have to log on to web sites such as Facebook, and your bank or brokerage site. (This is more secure anyway.) Remove short cuts and Favorites. The more difficult it is to get to these distractions, the less of a distraction they become.

Do it “speedy quick”.

My wife, Rebecca, is my exemplar for getting things done. She rarely puts things off and generally does now the thing that she needs to do. I am frequently amazed (and a little envious) of how much she can get done in a certain time period.

If you still have trouble dealing with things right away, then try this option. It’s one of the most common antidotes for procrastination. Break a project down into individual tasks. Break the tasks down into smaller steps. And, if necessary, break those smaller steps down into tiny baby steps. This moves your focus from an overwhelming project to a task you can get your head around.

Suppose for example you have completed your 45 – 90 minute time block of deep work when you have concentrated on your priority goal or project. Now you check your inbox and you have 50 e-mails to deal with. You can tell from the subject line or the sender that 10 of these are either junk mail or things you are not interested in. Delete them.

As you scan through the other messages, you see 10 more that you require information from someone else. Forward these on to those people. (And keep a copy in a delegation folder so you’ll know to check on them later.)

Fifteen of the remaining messages require no immediate action. Some contain information you may need later. These you file in your reference folder. Some require action on a specific date. Put them on your calendar or file them in a tickler file to show up on the appropriate day.

The remaining 15 e-mails require action from you. As you open each e-mail, do now what you need to do to complete the e-mail. Don’t read it and put it aside for later. Don’t put that rock in your backpack. Reply to the message. Pick up the phone and make a call. Deal with the issue. If you can’t resolve it completely, do as much as you can. Decide that when you open each e-mail, you will handle it completely.

1. Decide that you are a person of rapid response. You handle things immediately as they arise. You don’t step over anything and you don’t carry rocks in your backpack to deal with later.

3. Schedule deep work time blocks of 45 – 90 minutes when you concentrate on your most important task or goal. [See Cal Newport’s Deep Work.] Take measures to ensure you are not interrupted during this time. Outside of this deep work time, do what needs to be done, Sparks speed style.

Of course, we are talking about doing the important tasks, those things that will make a difference in your life and your world. As Peter Drucker said, “There is nothing so useless as doing efficiently that which should not be done at all.”

Once you have determined that something is worth doing, however, do it now. Don’t fill your backpack so full of things to look at later that it impedes your journey up the mountain. If it’s worthy of your attention when you pick it up, deal with it. Immediately. Do it now! That is embracing the Excelerated Life!

Excelerated productivity — improving efficiency and effectiveness — is one step in creating your Excelerated Life, a life of flourishing, of well-being, meaning, and purpose. 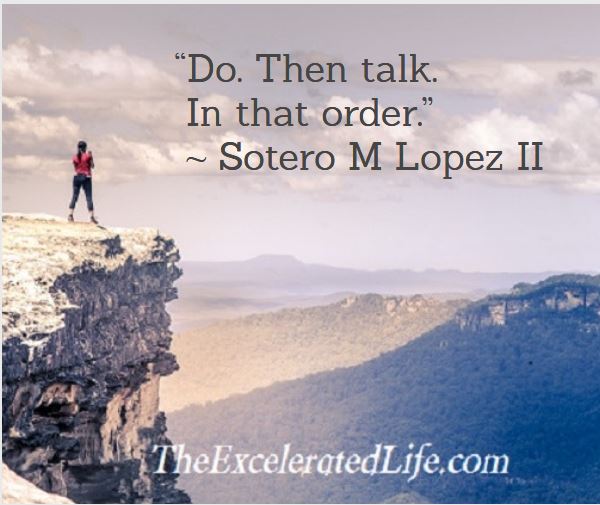