When I was about 9 or 10, I made my first farm. I flooded the nest, captured the queen and some of the workers and carefully put them in the jar full of dirt. I covered the jar with black construction paper to keep out the light. And I waited.

The next day, I removed the paper. Nothing discernible had happened although the ants were now underground. I replaced the paper and waited longer.

I frequently observe how one small action, taken again and again, over time leads to huge results. For example, I take a number of supplements and vitamins each day. I often think about how taking one pill from a bottle day after day after day eventually empties the bottle. And I think about how many bottles I have emptied over the years, doing it one pill at a time. One action, so small and habitual I hardly notice it, taken over time adds up to thousands of pills taken.

Now, the fact that I have taken a bunch of pills during my life isn’t the important point. But the powerful idea is this . . . one small action taken over and over, day after day, adds up almost imperceptibly into a remarkable outcome.

We sometimes refer to a major breakthrough that appears to happen in a short span of time as a “quantum leap”. But as Jeff Olson tells us in The Slight Edge, a real quantum leap doesn’t just happen spontaneously; it is something that finally happens after a lengthy accumulation of small efforts.

“Anytime you see what looks like a breakthrough,” says Olson, “it is always the end result of a long series of little things, done consistently over time.” [Olson]

Furthermore, if you are always looking for the magic bullet — the big break that allows you to change overnight — then you aren’t doing the small actions day in and day out that lead to success.

The Power Of Momentum

However, when you do perform these small but significant actions, day by day, something important happens. You start to build momentum.

Have you ever had to push a stalled car? A car weighs several thousand pounds and trying to push one is no small feat. It takes loads of muscle power to start it rolling. After much grunting and straining on your part, the car begins to move slowly. But as you continue to push, it rolls faster and faster. And it becomes easier and easier to keep it moving. It takes only a fraction of the effort that it took to get started to keep it rolling.

And here’s the sad part. If you quit pushing, the car rolls to a stop. And now you have to expend all the effort and grunting and straining to get it started again. You’ve lost the power of momentum.

Tap In To The Power Of Consistency And Momentum

How can you tap in to the power of small efforts compounded over time? Coupled with momentum, these small actions result in tremendous improvements. Here are some ideas to get you started.

Select one small action or behavior you can change to move you toward your larger goal. Perhaps you wait an extra 10 minutes before you have that first cigarette of the day. Or you leave the chips at the store rather than bring them home. You read 1 page per day. Maybe you do one push-up. You floss one tooth. Make your action so small that it is hard not to do it.

Now tie your new action to an anchor, an existing behavior. One of the most effective ways to pick up a new habit is to tie it (“anchor”) to an existing habit. Think of something you do every day (or several times a day): make coffee, pee, brush your teeth, shower, go to bed, get up, stop at a traffic signal . . . and you can think of many others. Select an anchor that is appropriate to the new habit you want to develop and use it as a trigger to perform the desired behavior.

Once you have your anchor habit, consider ways to make the desired new action or behavior even easier to do. Remove as many barriers as you can. If you want to read more, keep the book out where you can see it. If you want to practice the guitar, take the guitar out of its case and place it in your den or living room. If you want to eat a healthier diet, keep fruit out on the counter (and chips and cookies on a high shelf in the cabinet). Put your work out clothes in the bathroom or by your bedside before you go to bed. Make the new behavior as easy as you possibly can. [Achor]

Consistency is a key to forming a new habit. You must do all you can to perform the new behavior each time you perform the anchor behavior. To encourage yourself, keep a written chart showing each time that you do it. If you have a large calendar displayed somewhere, you could mark a big X on the days you successfully accomplished your new behavior. Seeing the string of X’s grow unbroken becomes a motivator to keep them going.

Ready to take the small steps that make a BIG difference?

1. Decide that you want to improve yourself and your life and commit to doing the steps that will propel you forward.

2. Use the model — Examine / Select / Anchor / Make it easier / Keep a record — to put your new habit building process in action.

3. Celebrate! Be sure to appropriately celebrate the small wins as well as the big victories.

When I stopped smoking years ago, I quit cold turkey. One giant step. But even then, I made many small changes in my daily routines to disrupt the nicotine habit. It appeared (and felt like) I made a major change overnight. But in reality, the real changes occurred over minutes and hours and days and weeks as, little by little, I made the transition.

Sometimes a giant leap is required. But more often, the changes we make are done bit by bit, like an ant moving grains of dirt to construct a home. A giant step may get you started but you’re going to need to take the small steps, day by day, sometimes even hour by hour, that instill the changes and make them permanent behaviors.

The little things ARE the big things. Tap in to the power of consistency and momentum. Repeat. That is embracing the Excelerated Life!

Taking Excelerated action in pursuit of your goals is one step in creating your Excelerated Life, a life of flourishing, of well-being, meaning, and purpose.

(1) I credit BJ Fogg for the concept of anchoring. Fogg uses this term to describe how an existing habit acts as an “anchor” where you attach the new behavior you want to become a habit. Learn more about BJ Fogg’s work and the Tiny Habits Method at https://www.tinyhabits.com/

(2) For more on this concept, see “The 20 Second Rule” ~ Principle #6 in The Happiness Advantage by Shawn Achor. 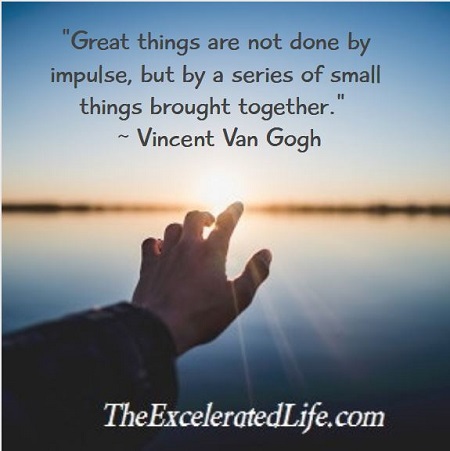 2 Replies to “The Little Things ARE The Big Things”