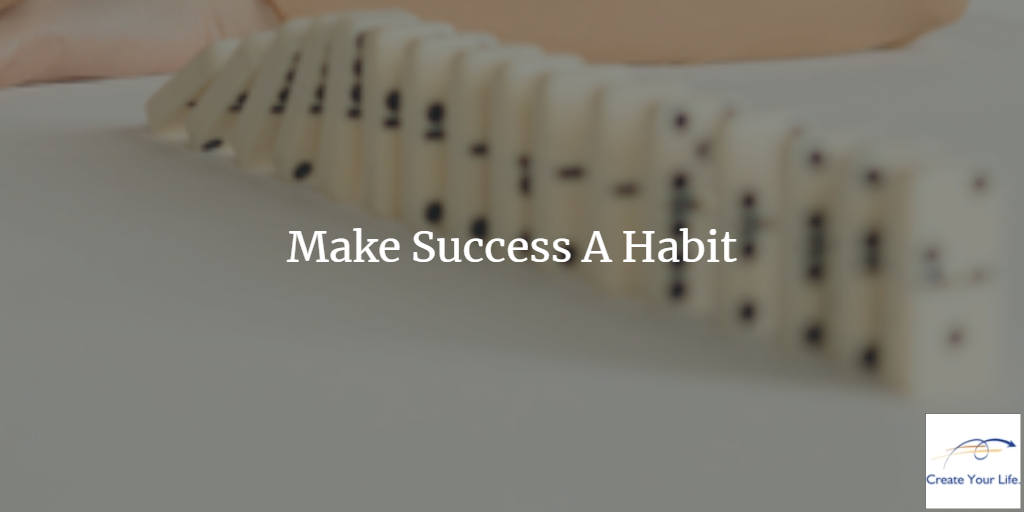 If you want to make success a habit, decide what you are going to do, then do it every day. When you know how to create helpful habits (and disrupt unhelpful ones), you can come up with your own roadmap of success.

The other day, out of curiosity, I googled this term: “make success a habit”.

I wasn’t actually looking for anything specific but I was still a bit surprised by the things that turned up – anywhere from five to twenty-three habits to follow to be successful.

However, I’m not interested today in listing specific habits. I want to show you how you can make habits of the behaviors you select to make you successful, however you define it. When you know how to create helpful habits (and disrupt unhelpful ones), you can come up with your own roadmap of success. (And if you need help with specific ideas, you can always google them!)

Before we discuss specific ways to make success a habit, let’s start with a model for behavior change.

BJ Fogg is a professor at Stanford University, where he founded the Behavior Design Lab. Fogg consults with business innovators to teach them about human behavior. He created the Tiny Habits Academy to help people everywhere learn to create helpful habits. He combines his research and his experience in the best-selling book, Tiny Habits (The Small Changes That Change Everything).

From his years of study and research, Fogg has developed a model for behavior: B = MAP.

Interestingly, Motivation and Action are inversely related. The easier it is to do a behavior, the more motivation you’ll have. And the harder it is to do, the less you are motivated.

Finally, P is for prompt, something to cue you to do the behavior. A Prompt is mandatory; no prompt, no behavior.

BJ Fogg calls them “tiny habits”; Stephen Guise named them “minihabits”; and James Clear refers to them as “atomic habits”. However you refer to them, they all advocate changing behavior by making tiny changes – “stupid small” according to Stephen Guise – compounded over time. This works whether you are trying to stop an unwanted behavior or make a desirable behavior into a habit.

Go back to the behavior MAP. Recall that the easier a task is, the more motivated you are to do it. This idea of tiny steps is a way to get past the motivation stumbling block.

All habits begin by following these four steps in this order: cue, craving, response, reward. [Clear]

A Cue is any factor that prompts you to take action. There are three types of prompts, person, context, and action. {Fogg] Person prompts rely on something inside you; they are the least reliable in terms of habit cueing. Context prompts are cues in your environment. (For example, removing the junk food from your cupboard in order to improve your eating habits.) And Action prompts, as the name implies, are cues tied to an action you already do. (After I brush my teeth, I’ll floss.)

Craving is your motivation to change. Without a craving, a desire, there is no motivation to act. You could say the purpose of a habit is to quench a desire or craving.

Response is the actual behavior you want to perform, which results in the…

Reward, the satisfaction of the craving.

So, you see a cue or prompt that sets up a desire or craving. You respond by doing a specific behavior. And you are rewarded for that behavior by having the desire satisfied. (At least until you see the prompt again.)

The ABC’s of Habit Creation

A = the Anchor (aka cue or prompt) which is an existing routine or external event.
B = the Behavior (response): a tiny action of the new habit you want to create.
C = Celebration (reward); done immediately after the behavior to create positive emotions.

Let’s say, for example, that you want to begin meditation and prayer every morning. Here is how you might design this habit.

Anchor: getting up.
Behavior: go to your meditation cushion or other designated place, sit, take a deep breath in, and exhale slowly.
Celebration: smile and say “I did it!”

Now, one breath is probably not your final desired habit, but remember, this is getting you over the obstacle of getting started. You can add more breaths or minutes as you become habituated to the behavior.

How To Create a Habit

If you are going to make success a habit, you must learn the steps for automating desired behaviors. These are the requirements for creating habits. [Clear]

Use the MAP of behavior model to create tiny habits that you want to begin. These are the steps.

To make it obvious, select a prompt that is obvious and reliable. The best is to tie it to an existing behavior but you could also use a prompt in your environment (i.e, a context prompt).

Make it attractive and desirable. Without a craving, a desire, there is no motivation to act; you engage in a habit because of the good feeling you anticipate you will have afterward.

To make it easy, use James Clear’s Two-Minute Rule for new habits. The Two-Minute Rule says to make the initial habit something that can be done in two minutes or less. Think of Stephen Guise who came up with the idea of minihabits by setting a goal to do 1 pushup.

In order to make it satisfying, have a reward in place immediately when you complete the new behavior. Celebrate even the tiniest win!

How to Break a Habit

Sometimes, success means stopping an unhelpful habit. These are the requirements for replacing an undesired habit. [Clear]

Make the prompt invisible. For example, if you want to cut back on eating junk, get rid of the junk food in your pantry. James Clear tells how he was able to give up social media during his work week by having his assistant change all his passwords on Monday morning. On Friday, she told him what the new passwords were, giving him the weekend to check in on Facebook, etc. [Clear]

One way to make the behavior unattractive is to list all the benefits of NOT doing the habit. And remember that motivation and ability go hand in hand. The harder it is to do the less you’ll be motivated to do it. So . . .

To make it difficult, use Shawn Achor’s Twenty-Second Rule. Achor determined that a 20-second delay is all that is necessary to replace an undesired behavior with a more desirable one. When Shawn wanted to stop watching so much mindless TV, he stuck the TV remote in a drawer in the next room where it took him an additional 20 seconds to retrieve. He stopped watching so much TV, instead picking up the book he had placed nearby. [Achor]

Make the result unsatisfying. Instead of celebrating, think of a punishment as an outcome for doing the behavior. I once read of two friends who wanted to be less sedentary. They agreed to do a certain amount of movement each day. Then they each wrote a check for $100 and gave it to the other one. They agreed that if one of them didn’t do the requisite movement, the other one would give the money to a charity the loser didn’t like. Neither one ever missed a day of exercise.

Suggested Habits for an Excelerated Life™

I said at the beginning that I was more interested in showing you how to create a habit than in giving you a list of “habits for success”. But in case you’re interested or are struggling with how to begin, one of these may be a good starting point.

So what’s your next step? Peruse the list above, or come up with your own.

Next, select a behavior you want to turn into a habit then

OR select a behavior you want to stop doing habitually then

The Key to Success

If you truly want to make success a habit, you must decide what you are going to do, then do it every day. One reason to start with tiny steps is to get beyond the motivation blocks. Recall that the easier an action is to perform, the less motivation you need to do it. But taking your step today isn’t going to make the change. You must take it today, tomorrow, the next day, and the next, and the next, and . . . Eating a baby carrot today isn’t going to be a big improvement. But eat a baby carrot today, then again tomorrow, and again and again, and in a month, you’ll have eaten a lot of carrots, but, more importantly, your perspective will change. Chances are you will have begun replacing unhealthy foods with more vegetables and fruits.

The big idea behind tiny habits or minihabits or atomic habits is that they help build consistency. Small, consistent effort over time aggregates and compounds into mighty changes. Consistency is a major factor leading to success.

So decide on a behavior that will mean success for you. What is your prompt? What’s your reward? Make it small enough that you can and will do it consistently, every day. That’s how you make success a habit. That’s how you embrace your Excelerated Life™!

What habits have you found helpful in your own journey to success?
Share your thoughts by leaving a comment below.