“Many of our repeated behaviors are cued by everyday environments, even though people think they’re making choices all the time.” ~ Wendy Wood

You and I may think we’re in control of our actions, but research shows that nearly ½ of human behaviors occurs in the same location each day and is cued by the environment. [Duke Today] Recall Charles Duhigg’s “habit loop”, the 3-step process that causes habits to develop. [Duhigg] The habit loop consists of 1) cue, 2) routine, and 3) reward. Repetition of this loop over time causes a behavior (the routine) to become ingrained as habit.

According to Wendy Wood, formerly the James B. Duke professor of psychology and neuroscience at Duke and now at the University of Southern California, the cue is often our environment. Wood says, “Most people don’t think that the reason they eat fast food at lunch or snack from the vending machine in late afternoon is because these actions are cued by their daily routines, the sight and smell of the food or the location they’re in. They think they’re doing it because they intended to eat then or because they like the food.” [Duke Today]

To change a habit, change location.

Consider a detrimental habit some college students develop – the habit of watching TV instead of studying or doing other important work. In one study, Professor Wood found that if college students transferred to a different university, they were able to break the TV habit. But they were able to break the habit only if the television was in a different location at the new school. If the television was in the same location at the new school (the dorm lounge or student union for example), students were not as successful at giving up the TV habit. What this means for those of us trying to give up an old habit or install a new one, says Wood, is that we should pay attention to the environment to help us sustain the behavior over time. [Duke Today]

The path of least resistance

Of course, you don’t have to take so drastic a step as changing colleges to create a new habit or weaken an old one. As a rule, human beings (including you and me), tend to take the path of least resistance. Marketers know this. That’s why we are given the opportunity to sign up for a free magazine subscription for a couple of months, but then continue on as a paid subscriber. Companies know that, once we sign up, chances are good that we won’t take the trouble to cancel the subscription.

Or consider organ donations. Most people agree that this is a good thing but few people are willing to fill out the forms necessary to become a donor. Some countries have switched from an opt-in to an opt-out program, meaning that everyone is automatically enrolled as a donor and you must opt-out to be dropped from the program. A case in point – when Spain switched to an opt-out program, the number of donated organs doubled. [Achor]

In The Happiness Advantage, Shawn Achor tells about his own decision to stop watching so much television and use that time to practice the guitar, or read, or write. He removed the batteries from his remote and placed them in a drawer in another room. He bought a guitar stand and placed his guitar next to the sofa. He also placed a book he wanted to read within arm’s reach.

The first few days, he came in, flopped on the sofa, and punched the remote. And punched it again and again, until he remembered that he’d removed the batteries. And then, because it was easier to pick up the guitar or the book than to walk into the next room to get the batteries or even to get up off the sofa and walk over to the TV and press the On button, he practiced the guitar or reached for the book. He did this day after day and eventually he replaced the TV watching habit with the positive habits he wanted to acquire. [Achor]

“Success is nothing more than a few simple disciplines, practiced every day while failure is simply a few errors in judgement, repeated every day.” ~ Jim Rohn

Simple daily disciplines, as Jeff Olson informs us in The Slight Edge, are small, productive actions repeated over time. These small actions repeated consistently eventually bring success. On the other hand, small errors in judgement – neglecting these simple daily disciplines – repeated over time, lead to failure and disappointment. Simple daily disciplines are, as Jim Rohn tells us, easy to do but equally easy not to do. You can — some say you must — change your environment to make it easy to do the positive things you want to become habits and to make it more difficult to do the negative habits you want to quit doing.

Use your environment to reduce the energy needed for habits you want to do.

Use your environment to increase the energy needed for habits you don’t want to do.

Given Dr. Wood’s statement that almost half of our behaviors are cued by our environment, doesn’t it make sense to use this knowledge in the quest for adapting and adopting positive habits? BJ Fogg, a behavioral scientist at Stanford, stated that there are only 3 ways to change behavior: 1) have an epiphany – a divine revelation, 2) change your environment, and 3) take baby steps (cf. mini habits). [Fogg] Option 1 is not very likely but you and I can harness the power of environment. We can create tiny new behaviors to Excelerate positive changes and make them habitual. That is embracing the Excelerated Life!

BJ Fogg, “When you learn my tiny habits method, you can change your life forever”,,April 17, 2018 <https://www.tinyhabits.com/> 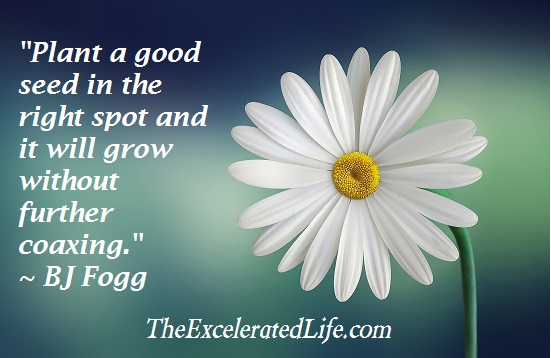 2 Replies to “Want to change a behavior? Change your environment.”