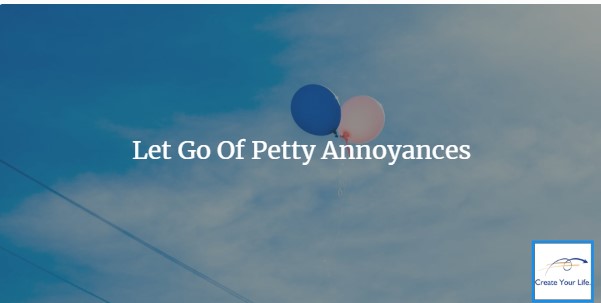 If you are tolerating things that you can fix, fix them. But let go of petty annoyances that you have no control over.

When I was in my early twenties, you know, my “hippie” years, I bought an old used red-and-white VW Microbus . . . like Arlo Guthrie drove in the movie Alice’s Restaurant. It was in pretty sad shape, and I had great dreams of fixing it up.

I managed to do some small repairs, but I noticed it was using oil, something I wasn’t prepared to tackle. “I need to get this to the shop,” I said to myself, and for a couple of weeks, this was heavy on my mind. But as time passed, I thought about the oil problem less and less. What started out as a major problem in my mind diminished as I continued to ignore it. After a couple more weeks, I rarely thought about the problem as I drove my Microbus around.

One day, I started out in my trusty Microbus. A few miles down the road, the thing began making a terrible racket, shimmying and shaking. Then the engine stopped. Seized up in fact. I had tried running the thing without any oil. As I tolerated a major mechanical problem, it became smaller and smaller in my mind, until it practically disappeared. Disappeared to me, that is — the real problem was there all along, getting worse. I never drove that car again.

That’s the trouble with tolerations. If you put up with something long enough, it fades into the background. Major problems become minor aggravations. Minor aggravations become petty annoyances. Eventually, petty annoyances drop off your radar. Then your life falls apart or you get stuck in place (or on the side of the road) because you aren’t dealing with your stuff.

In deciding how to approach our tolerations, it is necessary to identify two types: those things you can fix and those situations, people, and so forth that are not under your immediate power to fix.

Fix What You Can

This is probably the easier and the more direct way to handle tolerations. These are the things you are putting up with that you have a way to correct. The missing button on your favorite shirt. The car that’s burning oil. The messy desk. The report that is always turned in late.

We’ve talked on a number of occasions about how to deal with these types of tolerations. You can find more ideas here or here.

But what about the things that are not under your direct control, such as those little day-to-day annoyances we are all faced with? How do you let go of those?

Deal With Irritations You Can’t Fix

Remember the first rule of Stoicism: There are things within our control and things that are not in our control. When thinking about the things you can’t control (and there are many), remember, too, that there is one thing that is always under your direct control. You.

So, let’s look at some things you can do to let go of annoyances. These include picking your battles, talking it out, stop talking about it so much, and gaining perspective.

Suppose you are running late for an appointment and encounter a road-paving crew that has half the road blocked. You have to stop for the flag person and wait till the drivers coming from the other direction clear out. Before you get really upset, be sure there is something to be upset about. How much control do you have over this mess? Absolutely none. What are the reasons for being impatient, annoyed, even angry? Absolutely none. What can you exert control over here? Yourself. You could do some deep breathing or some other calming practice.

As a younger man (post VW Microbus era), I thought I was very patient. I could endure a lot of stuff and seem quite unruffled, but sometimes a tiny annoyance would send me over the edge. I’d fly into a rage out of all proportion to the remark that set me off.

In talking to a therapist, he explained that instead of confronting a thing that aggravated or annoyed me, I kept everything inside. I was like a balloon that was inflating bigger and bigger. Eventually, the balloon would be so full that some tiny irritation caused it to burst, and all the pent-up anger and annoyance came flying out. With his advice and help, I began learning to express my emotions when they came up, not letting my balloon get so full.

Sometimes, it can be helpful and healthy to talk about an annoyance that is bothering you. Especially if you tend to let things build and build until they reach a breaking point.

Stop Talking About It

It’s good to get things off your chest and not hold them inside. But be careful you don’t get into a “complaining habit”, where you constantly go over and over an injustice or a slight, real or imagined. Complaining keeps the annoyance front and center in your consciousness.

A driver cuts you off in traffic. Your boss doesn’t acknowledge the extra work you put in to get a project finished up on time. Your boyfriend or girlfriend forgets that today is the 8-month anniversary of your first date.

Although you are the center of your universe, your universe is different from others’. Perhaps the other driver didn’t see you or had an emergency. It could be your boss is concerned about keeping the business afloat. Maybe your significant other . . . well, there’s no excuse for forgetting your 8-month anniversary, but you get the idea. It isn’t always about you.

If you’re feeling annoyed, by all means, get it off your chest. But remember, the more you discuss it, the more you keep the annoying event alive. At some point, it’s better to just let it go.

If you find this frequently happens to you, Barbara Fredrickson, positive psychologist extraordinaire, suggests having some “healthy distractions” on hand. This is something that “literally takes your mind off the problem.” [Fredrickson] Take a walk. Do a craft. Lift weights. Practice yoga. Meditate. Read that book you’ve been meaning to get to. Do whatever activity completely absorbs your attention and breaks the cycle of rumination.

Or you could change from the 10-foot view to the 30,000-foot view. The irritation is looming in your mind now, but what will it be like in a week? A month? A year? 10 years? Seeing things from a longer view can help put them in perspective.

Or go the other way – see the little picture. Instead of “I’ll be late for my appointment and I’ll probably not make the sale and then I’ll be fired” (catastrophic thinking), try “I’m upset because I cut the time too close and now I’m having to wait to get through this construction. I may be a little late, but it won’t be that long.”

Instead of “My boyfriend forgot our 8-month anniversary. How could he be so thoughtless? Maybe he doesn’t really love me!”, try “Maybe not everyone puts as much store in monthly anniversaries as I do.”

Looking at the irritation from a different perspective can help you realize it maybe isn’t such a big deal. Perhaps you can just let it go?

You are very likely tolerating some things you can deal with. Fix them and get them out of your hair. However, you cannot control everything that happens to you or around you. You have a picnic planned with your sweetie but it’s pouring the rain? You cannot control that. Your flight has been delayed and you have two hours to cool your heels in the airport? You can’t control that, either. You can control your response to these annoying things, though.

Fix what you can and let go of the annoyances you have no control over. That is embracing the Excelerated Life™!

(Please NOTE: I am neither a medical professional nor a licensed counselor. If you are struggling and simply cannot accept or move past a situation you are dealing with, I urge you to seek the assistance of a qualified professional.)

Dealing with the things you’ve been tolerating is one step in creating your Excelerated Life™, a life of flourishing and well-being, and a life of meaning, purpose, and service.