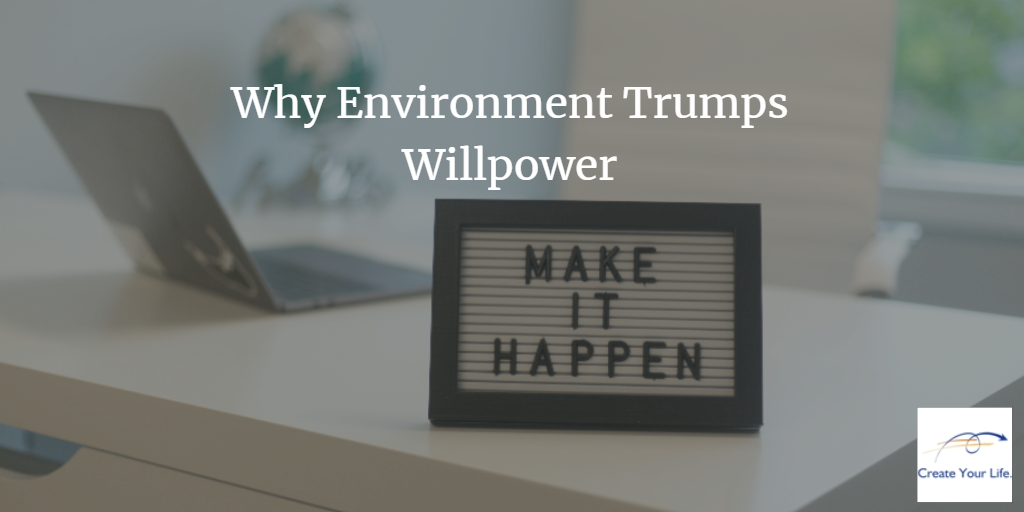 Don’t waste your willpower on battles with the environment. Use your limited willpower to create better environments and better habits instead.

Richard Thaler and Cass Sunstein open their book, Nudge: Improving Decisions About Health, Wealth, And Happiness with a story about Carolyn, the director of food services of a large school district. In the story, Carolyn decides to try some experiments to see if the placement of food has any impact on the choices kids make.

In some of the cafeterias she oversees, she places french fries at the kids’ eye level. In others, she puts carrot sticks there. In come cafeterias, she puts desserts first on the line. In some, desserts come last. And in others, the desserts are placed in a separate line.

In the end, the results show that the location and placement of food items can influence which foods get chosen by as much as 25%.

Thaler and Sunstein write: “small and apparently insignificant details can have a major impact” on behaviors. Research indicates that the details of our environment play a much greater role in our behavior than we realize. It’s why environment trumps willpower.

If you want to change a behavior, you’ll have more success by setting up your environment to support the new behavior rather than trying to willpower your way through.

The key to willpower is to use it for avoidance rather than restraint. Avoiding temptation is easier than trying to resist it. Now you’re playing offense instead of defense.

Roy Baumeister and John Tierney, who literally wrote the book on Willpower, say: “People with good self-control mainly use it not for rescue in emergencies but rather to develop effective habits and routines . . . They use their self-control not to get through crises but to avoid them.” [Baumeister]

To play willpower offense, use willpower to set up an environment that encourages the behavior you want to have. Then let your environment, not your willpower, guide your actions.

In fact, Hardy recommends setting up a number of different environments. For example, have a work environment and a rejuvenation or recovery environment.

You might want to set up your work environment to eliminate media distractions. You would turn off e-mail and other push notifications. You’d also want sufficient lighting; maybe add music if you like. And try to set it up so as to limit interruptions.

In your rest environment, make it such that no work ever takes place here. For example, set up your bedroom for sleep only – no TV, no eating, no work of any kind.

The Path of Least Resistance

As you begin to take steps to change your environment, think about ways to make your desired behavior as easy as possible while making the undesired behaviors more difficult, if not impossible. Shawn Achor calls this using the “path of least resistance.”

In The Happiness Advantage, Achor writes: “[T]he key to daily practice is to put your desired actions as close to the path of least resistance as humanly possible. Identify the activation energy -— the time, the choices, the mental and physical effort they require -— and then reduce it. If you can cut the activation energy for those habits that lead to success, even by as little as 20 seconds at a time, it won’t be long before you start reaping their benefits.” [Achor]

There’s no need to disrupt your whole life, or completely rearrange your surroundings to make improvements in your environment. In fact, small changes are more apt to “stick” than if you attempted to do a major overhaul. Sometimes a twenty-second difference is all you need.

How about you? How could you update your environment so that you rely less on willpower to improve your behaviors? Think of the possibilities.

What could you start doing? What could you stop doing? How can you alter your environment to help, or even better, to force you to start or stop? Open your journal or get a sheet of paper and start jotting down ideas.

If you want help to get started, consider these areas:

Ideas for Altering Your Environment

Here are examples of actions you might try. Use these to jumpstart your own creativity.

Environment trumps willpower every time. Willpower is like a muscle. You can build it up, and you should. But it is far better to outsource your behavior to your environment. Instead of using up your willpower attempting to resist temptation, use it to set up your environment to avoid temptation. That’s playing willpower offense. And that is embracing your Excelerated Life™!