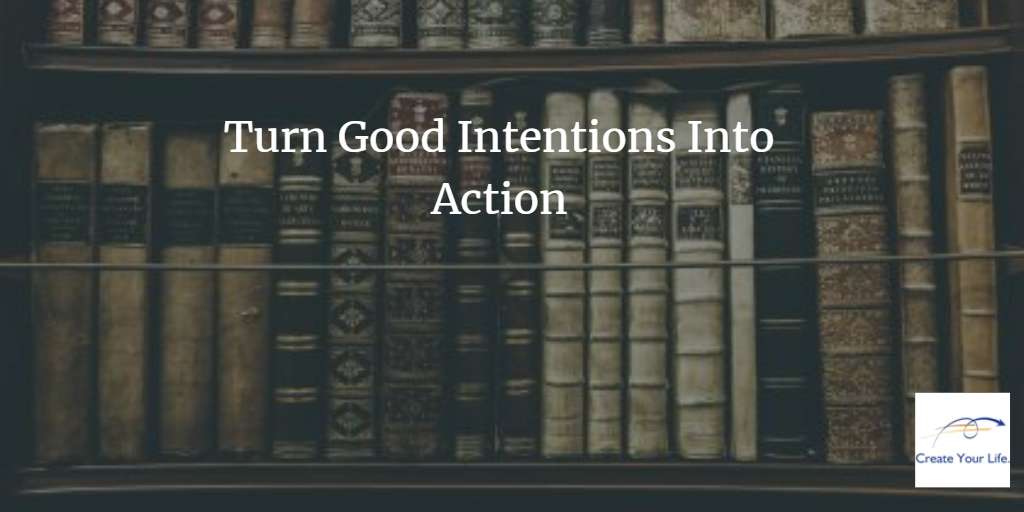 Where Good Intentions Take You

I started out the year with great intentions. I had set a number of BIG goals and I could foresee myself next January celebrating all my accomplishments. I intended to lose weight, about 35 pounds. I wanted to take my family on a two-week driving tour of the US. I planned to practice the guitar EVERY day to master some new techniques. I had a shelf of 25 or 30 new books that I intended to read. This was going to be my year . . . the year when I really made some giant steps on the road to self-improvement.

Somehow I never really got started. The next January arrived and found that I had done very little toward reaching my lofty goals. I had good intentions but somehow never put them into action.

“The road to hell,” my mother used to say, “is paved with good intentions.” And I’m sure lots of other mothers (and fathers) have said this, too.

The wisdom of Holiday Mathis: “Anyone can have intentions, and lots of people do. But it’s action that matters.”
[From horoscope for Gemini, January 6, 2021]

Intentions are fine, even necessary to help you get pointed in the right direction. But intentions by themselves get you nowhere. You’re at the starting line — what are you going to do now? Action triumphs over good intentions every time.

In other words, put your money where your mouth is. At some point, you have to quit talking and get down to work. The words of Emerson come to mind. “What you do speaks so loudly that I cannot hear what you say.”

And what you don’t do yells even louder.

The Will To Win

In his book, Be a Liver of Life, Not a Gall Bladder, author, speaker, and humorist Michael Broome tells of a friend, a fiercely competitive racquetball player. The guy stomps, screams, curses, throws his racket, and is frequently heard to yell, “I’d rather die than lose!!” And yet, even though “he frequently loses,” Michael writes, “he’s still alive. He has the desire to win, but he loses because he doesn’t have the desire to PRACTICE!” [Broome] Micheal’s friend has the intention to be a good racquet ball player, but he hasn’t taken sufficient action.

A plan for action is, as they say, necessary but not sufficient. A plan is the first step in putting your intentions into action.

“You can talk all you want about having a strategy for your life, understanding motivation, and balancing aspirations with unanticipated opportunities. But ultimately, this means nothing if you do not align those with where you actually expend your time, money, and energy.” [Christensen]

Have a plan by all means. Just be sure your plan leads you in the right direction, in the direction of your goal. Taking action is a must, but if you’re going the wrong way, you just get lost faster.

How To Know If You Are Moving

“Thinking counts as effort, but nothing comes into being through thought alone. Air must be moved, words spoken, written or sung, action and work of any kind completed. The more air that’s moved, the more real a thing becomes.” ~ Holiday Mathis

Here are the principles for taking action to achieve a goal, make a change, learn a new skill – to accomplish whatever it is you want to accomplish.

“What if the thing you choose to do is not the ‘best’ thing? I have a firmly held belief that it is better to do the wrong thing than nothing. Any action you take will lead you closer to your goal.” ~ Cathy Stuckey (“The Idea Lady”)

Here is an action step you can take today. Select an objective — a goal you’ve been meaning to start, a skill you want to master, a new habit you want to instill. Take a few minutes, right now, to list between 1 and 5 action steps you can take each day this week toward your goal. Then schedule them in your calendar. You’ve begun to take action.

Remember, action wins over good intentions but only every time. For things to change, something has to move. If you desire a change, move. Take some action. Today. That is embracing your Excelerated Life™!

Broome, Michael. Be A Liver Of Life, Not A Gall Bladder. Charleston, SC: Advantage Media Group, 2006.