I tossed another ball. All 10 bottles went down. Now, I’ve got the hang of it. I tossed another, and another, and another — but somehow I failed most of the time to knock down all 10. When my stake reached $16, I began to have doubts. At $32, a kind of desperation set in. At $64, a cooler head (my girl friend’s) intervened and convinced me to cut my losses and get out of there . . . which I did.

This is the kind of mistake a young, inexperienced person can make. I stewed over it for several days — OK, a few weeks! — kicking myself, engaging in “what if” and “if only” thinking. But eventually I got the lesson and I let the anger and frustration go. I took to heart the $64 worth of experience I had gained and I have never again fallen for an “easy money” trick.

Over the years, I have learned to see mistakes and problems and stumbling blocks as teachers bringing lessons that are sent to help me grow. “Even enlightened beings burn their bagels once in a while. It’s important to maintain a sense of humor because this is how you will stop being afraid of making a mistake. You’ll make some, but so what? That’s why they’re called mis-takes. Humor relaxes the uptight ego. You get a new cue from your inner Self and simply say, ‘I missed my cue, so let’s do a second take.’ Your willingness to take the risk of making a mistake is actually an expression of courage and a willingness to grow from them.” ~ Michael Bernard Beckwith, Spiritual Liberation: Fulfilling Your Soul’s Potential

“The blessing in the lesson”

Imagine yourself as the director and star of a movie called “Your Life” — which in a way you are. Would you expect to shoot an entire film from beginning to end without a pause or without having to re-do a scene? That isn’t how movies are made, is it? Most scenes are shot many times – multiple takes – until the director and actors are satisfied with the result. Mistakes are simply this – mis-takes. “I missed my cue so let’s do another take.” “Take two!” It’s all part of the process, whether you are shooting a movie or creating your life. No big deal. Learn the lesson and try again.

Accept. An important 1st step is to accept the current situation as it is – don’t spend time wishing for a different outcome or engage in “what if’s” and “if only’s”. Acceptance doesn’t mean approval or agreement or condoning or consenting or endorsement. It simply means you understand that things are what they are and that what is, is. Begin to practice amor fati (literally “loving fate”); not merely accepting but LOVING what is, LOVING fate or destiny. Once you embrace the situation, you can relax and explore the possibilities for change. (Hint: The change almost always involves changing yourself.)

Regroup. A major failure is likely to leave you a bit shell-shocked. You feel disappointment. Maybe you find the situation hard to believe or difficult to accept at first. You could be angry or hurt or embarrassed. It’s OK to take a few minutes or a few hours or a few days to regroup, to lick your wounds, and to take care of yourself. No pity parties but a little self-care is called for. Remember the mantra, “No blame, no shame”.

Stay positive. Disappointment. Discouragement. Frustration. These are not positive emotions. But they are the emotions that often accompany failure. These emotions do not foster creative thinking or help you find the “seed of benefit” in the current situation. As a matter of fact, according to Dr. Barbara Fredrickson’s “broaden and build” theory of positive emotions, negative emotions narrow our focus, make us less resilient, and hamper our ability to bounce back from a set back. [Fredrickson] You are likely not overjoyed by your failures, but if you can take the broader perspective and see the failure or problem as a gift from the divine, you are more apt to find the lesson, the seed of good.

Embrace failure. “It is striking how often successful people have a counter intuitive perspective on failure. They strive to succeed, like everyone else, but they are intimately aware of how indispensable failure is to the overall process. And they embrace, rather than shy away from, this part of the journey.” [Syed] It can be counter intuitive to embrace failure, but it is an important part of success – like the 2 sides of a coin. Failure provides vital feedback on what we need to improve – it is a powerful learning tool, if we remove any stigma of failure from our mind. Consider your last failure. What important lesson did you learn?

Learn the lesson. This is another important step. “We learn wisdom from failure much more than from success.” said Samuel Smiles, author of such works as Self-Help , Thrift, and Character. “We often discover what will do, by finding out what will not do; and probably he who never made a mistake never made a discovery.” Some people believe that everything that comes to us in life (or that we bring to ourselves), both positive things and negative things, successes and failures, brings a lesson. (I happen to be one of those people.) If you accept that AND accept the things that happen — good and bad — you perceive the lessons more quickly. And learning the lesson leads to growth.

Act. One of the quickest ways I have found to keep yourself out of the doldrums of negative thinking is action. When you face a set back or failure, get busy. As Cathy Stucker (The Idea Lady) says: “I have a firmly-held belief that it is better to do the wrong thing than nothing. Any action you take will lead you closer to your goal.” In this case, you may not be ready to act on the event or situation that caused the failure or problem. That’s OK. Turn it over to your wise subconscious mind to mull over. Turn your attention to doing something – anything — else. Get out in nature and take a walk. Help someone less fortunate than you. Play with your kids. Get busy and the lesson (and often the solution you are looking for) will come in its own time.

Start with small steps. Incremental change bypasses the brain’s fear response and consistency actually changes the structure of the brain by adding to the growth of the myelin sheath around nerve fibers, increasing the speed at which impulses are conducted. “With deep practice, small daily practice ‘snacks’ are more effective than once-a-week practice binges. The reason has to do with the way our brains grow — incrementally, a little each day, even as we sleep. Daily practice, even for five minutes, nourishes this process, while more occasional practice forces your brain to play catch-up.” [Coyle]

Stuff, as they say, happens. Mistakes, or mis-takes, are inevitable. Whether it’s dropping $64 in a carnival game, blowing a major presentation in front of a potential client, or forgetting your kid’s soccer game or your wife’s birthday, we all need a re-take from time to time. And make no mistake – it is important to your growth to be able to make mistakes and to fail – and to learn from each mistake, each failure. If you aren’t making mistakes . . . you aren’t doing enough. Get busy making mistakes, learning, growing, and living. That is embracing the Excelerated Life!

Excelerated acceptance — identifying and accepting the things you are struggling with — is one step in creating your Excelerated Life, a life of well-being, meaning, and purpose. 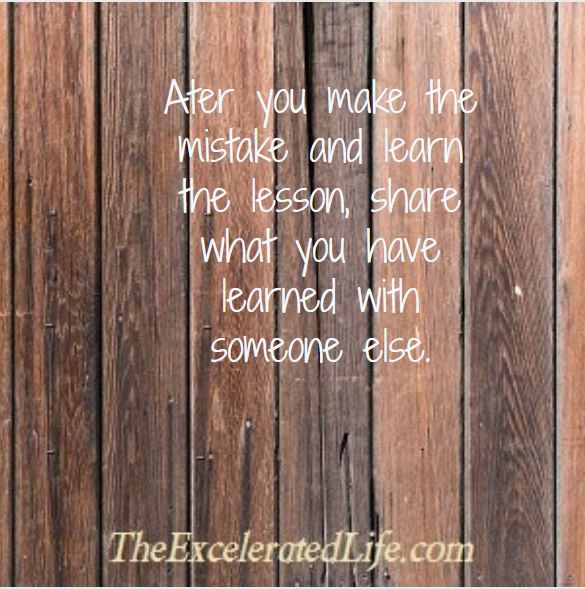