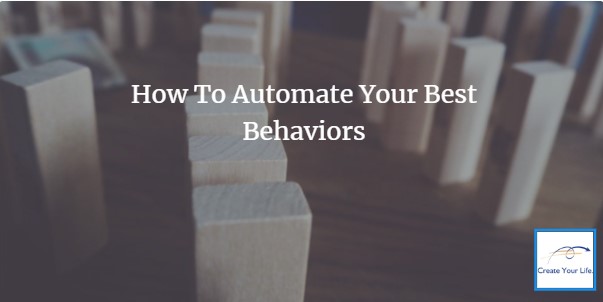 Research shows that up to 45% of our actions are automatic, driven by habit. A good number of these are daily activities such as eating, drinking, driving, and so on. Without the power of habit, most of your mental capacity would be taken up by these mundane but necessary activities. Another reason why habits are important is that they can be used to automate your best behaviors.

Some Thoughts On Habits

From William James, American philosopher and psychologist, and the first educator to offer a psychology course in the United States: “There is no more miserable human being than the one for whom nothing is habitual but indecision, and for whom the lighting of every cigar, the drinking of every cup, the time of rising and going to bed every day, and the beginning of every bit of work, are subjects of express volitional deliberation. Full half the time of such a man [or woman] goes to deciding, or regretting, matters which ought to be so ingrained in him [or her] as practically not to exist for his [or her] consciousness at all.”

From J. Paul Getty, industrialist and founder of the Getty Oil Company: “The individual who wants to reach the top in business must appreciate the might of the force of habit – and must understand that practices are what create habits. He [or she] must be quick to break those habits that can break him [or her] – and hasten to adopt those practices that will become the habits that can help him [or her] achieve the success he [or she] desires.”

We can deduce from these words of other thinkers and, more importantly, from our own experiences that habits are an important, powerful part of creating a successful (however you define that) life. Automating your best behaviors is one good way to put yourself on the upward spiral of success. It’s why Excelerated Habits™ is an important practice in creating an Excelerated Life™.

Let’s have a quick look at what habits are, why they are important, how to create them, and ways to automate your best behaviors using them.

Habits are behaviors that are, for the most part, involuntary . . . we do them without thinking about them most of the time. They are actions that we have acquired through repetition over time. Typically, the actions get easier as we perform them repeatedly.

Research has shown that habits can be deconstructed into three parts: cue, behavior, and reward.

A habit is basically built this way. We see or hear or do something that brings about a certain response or behavior. Performing the behavior rewards us in some way. Soon, the thought of the reward sets up a desire or craving for it when we see the cue, which prompts us to perform the action.

All the basic parts are required to build a habit. Without a cue, there is no prompt to do the behavior. And without a reward, we won’t continue to respond to the cue. This comes in handy when you want to build (or break) a habit.

Why Habits Are Important

Why are habits important? Are they important? Well, as William James stated, “Full half the time of such a man [or woman]” who doesn’t take advantage of habitual behavior “goes to deciding, or regretting, matters which ought to be so ingrained in him [or her] as practically not to exist for his [or her] consciousness at all.”

I’m not sure about half the time, but research has determined that up to 45% of our actions are automatic, driven by habit. [Wood] A good number of these are our daily activities and most of the time we don’t even notice them. If you had to think about and decide on every “cigar you lit or every cup you drank”, or about getting dressed, or driving, etc., etc., most of your mental capacity would be taken up by these mundane but necessary activities. Fortunately, we have the power of habit to take over most of these things, most of the time.

Sometimes, especially when we consider our so-called “bad” habits, it seems as if habits are easily picked up. If we take a closer look at how habits are formed, we see that isn’t the case. But having this knowledge can be helpful as we work to build helpful habits (and perhaps replace unhelpful ones).

Of course, one aspect to look at is the cue – routine – reward habit loop, as described by Charles Duhigg in The Power Of Habit. A cue is the trigger that “tells your brain to go into automatic mode”. [Duhigg] The routine is the behavior that is triggered by the cue. (Behavior can be physical, mental, or emotional. [Duhigg]) And the reward helps your brain decide if the loop is worth remembering and repeating in the future.

Windy Wood has spent her academic career studying habit formation and is widely recognized as an expert in the field. In her book, Good Habits, Bad Habits, she looks at the habit loop in terms of context – repetition – reward. [Wood]

The context of habit is your environment. Environment refers not only to your physical surroundings but to everything in your world that surrounds you, except you – your location, the people you’re with, the time of day, the thing you just did. Environment can be a “driving” force, making you more likely to engage in a behavior, or it can become a “restraining” force, setting up resistance to the behavior.

And while we rely on environment and are defined by it in many ways, we also have a good deal of control over our environment. [Hardy] This helps us create the appropriate context for the habits we want to build.

A behavior becomes easier as you repeat it. That’s the reasoning behind the idea of small steps; start small and work up to bigger improvements.

You have to consciously (read, “make yourself”) perform the behavior over and over until neural networks and memory systems are rewired. [Wood] How long? Depends on the behavior and the difficulty of performing it; the 21-day myth is just that – a myth. You need to make yourself do the action until it becomes automatic and you don’t have to think about it anymore.

It’s better if you do the behavior every time it is cued – environment helps with this. The good news is that it doesn’t kill your efforts if you miss a day. A lapse is not a relapse.

Repetition is necessary to make a habit but repetition alone is not sufficient. There must be a reward.

“Context will smooth the way, and repetition will jump-start the engine, but if you aren’t getting even a minor reward for your initial effort along the way, you won’t get that habit to start operating on its own.” [Wood]

To be effective, rewards must be immediate, right after we perform the behavior. Getting a reward in two weeks, or at the end of the month, does not have the same effect on the brain.

The more effective rewards are intrinsic, tied to the behavior itself. Extrinsic rewards don’t have the same “habit-building” effect and can actually undermine our sense that we are building a habit for ourselves and not for the reward.

Finally, the best rewards are concrete, not abstract. [Segar] This follows with the intrinsic vs. extrinsic rewards. For example, if your reward for exercising is that you feel better afterward, you’ll be more apt to make exercise a habit than if you exercise to, say, lose weight (rewarded at a later date). [Segar]

Once you have a behavior in mind that you feel is beneficial for you, you can begin using the habit loop of cue – response – reward along with context and repetition to make it a habit. Your goal is to make the good habit so ingrained that it becomes second nature.

Joshua Hook offers these tips in his blog post, “6 Tricks to Automate a Good Habit“.

It Isn’t All Habit

“Remember – you can’t run on habit alone. As always, we have to remember that our habitual lives are best thought of as supporting us by liberating more of our mindfulness and attentional resources for other things.” [Wood]

Recall that about 45% of our behaviors are habitual; that leaves 65% under our “express volitional deliberation”. Why not use habits to automate our best behaviors and then put our attention and decision-making powers to being creative in finding ways to live out our purpose in Service to the world? That is embracing the Excelerated Life™!

Segar, Ph.D., Michelle. No Sweat: How The Simple Science Of Motivation Can Bring You A Lifetime Of Fitness. New York: AMACOM, 2015.