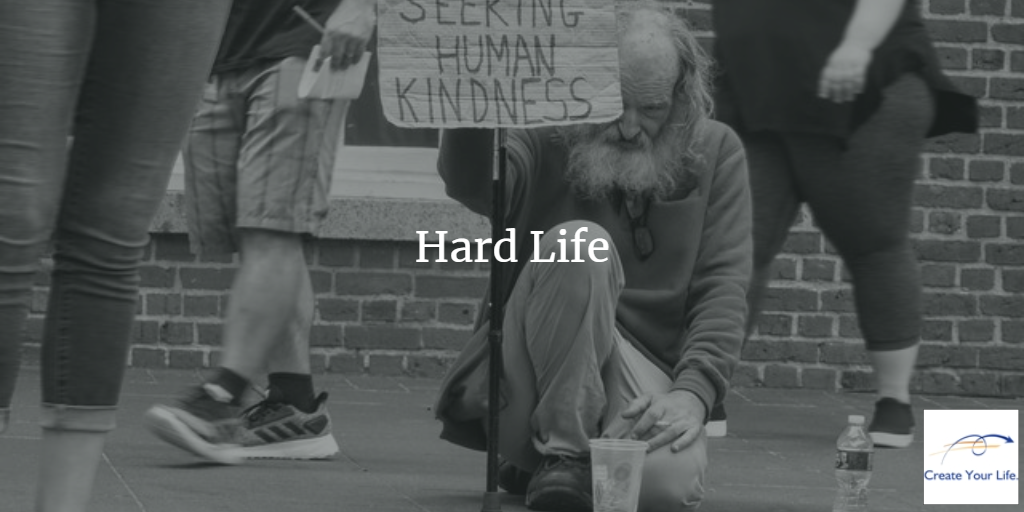 Nancy Griffith (“It’s A Hard Life Wherever You Go”)

Title Photo by Hejaar from Pexels

Positivity Has Benefits, But . . .

There is much to be said about the benefits of positivity and I’ve said it frequently in this blog: improved health, more satisfying relationships, sharper focus and enhanced creativity, higher pay, increased life span, improved resiliency and the ability to bounce back more quickly after setbacks.

But does keeping a positive outlook and taking measures to improve your happiness “set point” (your “average” level of positivity) mean you never face difficulties, pain, or hardship? Of course not. “It’s a hard life,” sings Nancy Griffith. “It’s a hard life wherever you go.”

We all have times of hardship, pain, and suffering. The body ages and new aches become old companions. Or you contract a chronic disease. A loved one dies or becomes incapacitated. You lose a job. Or a long-time love. You have a disability. You become estranged from a parent or a child. Your business goes bankrupt. Your spouse of many years asks for a divorce.

We may wonder sometimes how suffering can come to a perfect world ruled by a loving creator. I turn to that great philosopher, Dolly Parton, who famously said: “The way I see it, if you want the rainbow, you gotta put up with the rain.”

How Do You Face It?

How do you react when things get hard? Do you pull in on yourself, like a turtle pulling into its shell? Many times, when the going gets tough, we shut down and distance ourselves from others. That can be a mistake. Frequently, it’s at that very time that we need the contact and support of others.

In The Happiness Advantage, Shawn Achor describes two students with whom he was acquainted when he taught at Harvard University. Both girls were top-notch students who graduated at the top of their classes in high school. And both were caught off-guard by the stringent work requirements they encountered at Harvard. It became apparent mid-way through the semester that one of the two was going to thrive and the other was not going to make it. Given the following, can you tell which was which?

The Two Faces of Facing Adversity

Both girls were outgoing and had a large circle of friends. When things started getting difficult and the workload began to seem overwhelming, one student, Amanda, cut the ties to most of her friends. She spent many solitary hours in the library, studying and trying to keep up with the work. She cut out all of her social engagements and concentrated on buckling down to work.

Brittney, the second student, put in a great deal of hard work as well. But she organized study groups where she met together with several people to study. She made time to have lunch with friends and to participate in dorm activities then come back refreshed and relaxed. Instead of turning away from people, she found ways to increase her ties to others.

Can you guess who was the successful student in the long run? Achor writes: “While Amanda was divesting from her network and floundering as a result, Brittney was investing in something that continually paid dividends. Just as social support is a prescription for happiness and an antidote to stress, it is also a prime contributor to achievement . . .” [Achor]

Connecting with other people is an excellent way to face the hard things in life.

Another aspect of dealing with the hard life is accepting that sometimes life is hard. Acceptance doesn’t mean you approve of or agree to or condone or consent to the hard thing. It simply means you understand that things are what they are and that what is, is.

Acceptance allows you to end much of the self-inflicted suffering. To borrow an illustration from the Buddha, we all are susceptible to the “first darts” of life – the suffering we endure from the things that cause us physical pain or that cause pain to our loved ones. These are the darts that life shoots at us. But there is a “second dart” and these are tipped with one or more of the “three poisons”: greed, hatred, and/or delusion. This is the mental anguish that often accompanies physical pain.

It may not be a hard life everywhere you go, but it is certain that you will have some troubles along the way — the “first darts” that occasionally strike us. Give thanks . . . as well as you can . . . for the rain, understanding that “if you want the rainbow, you gotta put up with the rain.”

Reach out to your support group, refrain from shooting a second dart at yourself by giving in to mental anguish, and look for the lesson and the seed of good in each adversity. If you look deeply enough, the “seed of good” is there and the lesson is there. It’s always there. Just as surely as the rainbow follows the rain. And when you find it? That’s when you begin to embrace your Excelerated Life™!

Excelerated Positivity™ — building the skills in positivity that help you flourish — is one step in creating your Excelerated Life™, a life of flourishing and well-being, and a life of meaning, purpose, and service.

One Reply to “Hard Life”