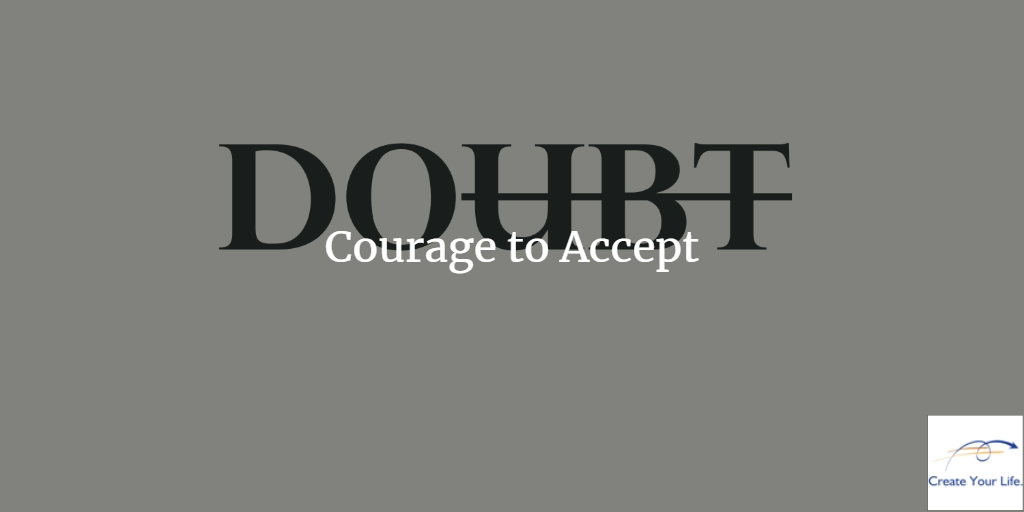 We might think those are “normal” reactions, but they are not the only way to respond to frightening and what, for most of us, feels like a catastrophic turn of events.

This is the story of one man who had a different experience. Eugene O’Kelly, was elected as chairman and CEO of KPMG in 2002. In 2005, at the age of 53, O’Kelly was diagnosed with inoperable brain cancer and given about three months to live. Naturally, he had some initial regrets that he would not have more time to share with his wife nor see his youngest daughter finish college or get married.

But he decided he could be grateful for the time he had left, thankful that he didn’t die suddenly or unexpectedly. With those feelings of gratitude, O’Kelly could accept his fate as a blessing and he created the best life he could in those remaining months. [O’Kelly]

When we have the courage to accept scary or shocking events, we gain the opportunity to turn them into something positive, even beautiful, as Eugene O’Kelly did.

(Please NOTE: I am neither a medical professional nor a licensed counselor. If you are struggling and simply cannot accept or move past a situation you are dealing with, I urge you to seek the assistance of a qualified professional.)

Face It to Fix It

There is a small church down the street from my house that frequently posts interesting messages on the sign out front. Currently, it says this: “You have to face it before you can fix it.”

There’s much truth in those ten little words. But to “face it” can take courage, especially if “it” is a frightening diagnosis, such as cancer. Or a major illness or injury. The death of a loved one. Or anything that is scary and distressing. It takes fortitude. And we can define fortitude as courage in adversity or the courage to accept.

Instead of facing up to the difficulties that confront us, “most of us invest a lot of energy, one way or another, in trying to avoid fully experiencing the reality in which we find ourselves.” [Burkeman] It’s painful because tough choices are inevitable and until we accept this, we risk burying our heads in the sand and doing nothing. However, this in itself is a choice and usually not a good one.

While we likely don’t know how much time we have left, unlike Eugene O’Kelly, we all have a finite amount. And you and I, we want to use whatever time we have to create our best lives, to embrace our Excelerated Life™. When you find the courage to accept whatever scary, difficult reality you are facing, you can then move ahead. You may eventually, as Eugene O’Kelly did, come to view it as a blessing.

Acceptance Is the First Step

The choices or occurrences we face aren’t usually a matter of life or death. But they may require us to change and that can be scary, too. [Dispenza] Realizing and accepting that our old way of thinking and feeling and seeing and doing isn’t working is the first step of growing and improving.

When you are faced with a situation or a choice that leaves you fearful or nervous or edgy, step back and observe how you are reacting to the fear, self-doubt, or uncertainty. This at least brings awareness. And awareness of your emotions and actions is the first step in changing them. [Swoboda]

In The Courage Habit, Kate Swoboda identifies four primary “fear routines”, ways we typically react to fear. Knowing your typical reaction to fear can bring awareness and awareness is the first step in finding the courage to accept what you’re dealing with.

As you work to break out of your particular fear routine, keep in mind that these reactions become habitual. “Knowing which fear routine you default to,” writes Soboda, “gives you the power to stop living on autopilot from a fear-based place, and to start untangling yourself from the overall ‘fear pattern’ of cue-routine-reward.” [Swoboda]

The simplest way to overcome adversity, Mark Manson reminds us, is to have something bigger to care about. [Manson] Even in a life and death situation, Eugene O’Kelly found the courage to accept his “death sentence”, to eventually see it as a blessing, and to create the best three months of his life.

As Stephen R. Covey reminds us in The Seven Habits of Highly Effective People:
“You have to decide what your highest priorities are and have the courage — pleasantly, smilingly, nonapologetically, to say ‘no’ to other things. And the way you do that is by having a bigger ‘yes’ burning inside.” [Covey]

Cultivate the Courage to Accept

Thankfully, most of us are not faced with a life-or-death situation every day. But there are plenty of other situations that are frustrating, formidable, and frightening. And finding the courage to accept them enables us to move on and make the most of an unhappy situation.

Ryan Holiday offers some Stoic wisdom that can help us find the courage to accept whatever we are dealing with. Here is my take on some of his ideas.

The first step in having the courage to accept a difficult situation is to be your Empowered Self. If you haven’t met him or her yet, then do this exercise first. Sit, stand, or walk as your Empowered Self to be that version of you. Then use this resource:

Identify your default fear routine and work to break the habit of reacting in fear. It is not easy but you can practice by putting these tools to use: Change your perspective. Stay positive. Look for the “seed of good”, the lessons you can learn from the situation. And remember to focus on the things you can control.

Acceptance is the first step in dealing with a difficult situation. And having the courage to practice acceptance is one step in embracing your Excelerated Life™!

Is there an event, situation, or person you’re having trouble finding the courage to accept?
What one small step could you take to help you begin the process?
Share your thoughts by leaving a comment below.

Excelerated Acceptance™ – identifying and accepting the things you are struggling with — is one step in creating your Excelerated Life™, a life of flourishing and well-being, and a life of meaning, purpose, and service.