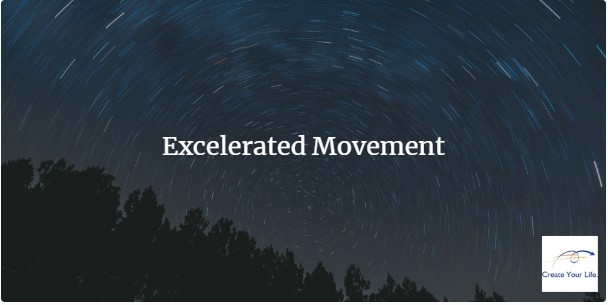 Action requires movement. Movement is necessary but not sufficient for action. There can be movement without accomplishing a specific action, but there is no action without movement.

A woodcutter needed a new saw. His crosscut saw was old, and he’d sharpened it so many times the blade was nearly worn down. So, he went out to buy a new one.

The salesman showed the woodcutter a shiny, powerful chain saw. “With this baby,” the salesman said, “you’ll cut ten times the wood you can cut with that old crosscut saw.”

The woodcutter paid the man, took the saw, and went out to work. But at the end of the day, he was back, tired, sweaty, and none too happy. “I thought you said this saw would help me cut more wood. I’ve worked all day, harder than ever, and I barely cut the same amount as I could have done with my old saw!”

“That doesn’t seem right,” said the salesman. “Let’s see if we can find out what’s wrong.”

He pulled the starter cord and the saw roared to life. “Hey!” cried the woodcutter in alarm. “What’s that noise?”

In the Excelerated Life™ plan, the principle of Excelerated Action™ comprises three practices: Excelerated Self-discipline™ — doing what you say you will do, Excelerated Movement™ in pursuit of your goals, and Excelerated Productivity™ — improving efficiency and effectiveness.

Movement is necessary but is not sufficient for action. There can be movement without accomplishing a specific action, but there is no action without movement. Excelerated Movement™ is pulling the cord on the chain saw of Action.

We could say that movement is “physical motion between points in space” [“Movement vs Action”] while action combines thought and movement to accomplish a predetermined result.

“When you’re in motion,” writes James Clear, blogger and author of Atomic Habits, “you’re planning and strategizing and learning. Those are all good things, but they don’t produce a result.” [Clear] I agree. Developing a strategy is necessary. Planning is necessary. And movement . . . actually doing the steps of your strategies and plans . . . is necessary.

Excelerated Action™ needs all of these components. Focusing exclusively on the process can give you the illusion that you are progressing toward your goal, when in fact you may not be. Focusing only on the outcome requires huge amounts of self-discipline and will power to keep moving — more than most of us can muster. Excelerated Action™ focuses on the desired outcome AND on the processes to achieve the outcome. It combines Excelerated Self-discipline™ — doing what you say you will do, and Excelerated Movement™ in pursuit of your goals. The result? The improved efficiency and effectiveness of Excelerated Productivity™

As a rule, you have more control over “process” goals than you do over “outcome” goals. For this reason, it is usually more beneficial to focus on your process rather than the outcome, up to a point. You must still keep your eye on the final goal.

Let’s say a salesperson sets a goal to increase her sales by 10%. To do that, she calculates she needs to make 5 additional calls per day — 15 instead of 10. As long as she makes her 15 calls, she is achieving her process goal. Each day, she can feel successful when she makes her 15 calls. But she must also keep aware of her sales. Are they going up consistently? If not, she may not be on track to reach her outcome goal of a 10% sales increase. The process is how she achieves the outcome, but the process is not the outcome.

Or suppose I want to lose 20 pounds and decide to add a 2-mile walk to my daily routine. Every day I take the walk is a day I have met my process goal. But I also need to keep an eye on my weight. If it isn’t coming down, I may need to adjust my process goal.

Focus on the process, but don’t confuse process and progress. You must consider the outcome as well.

Action requires movement. Movement is a necessary part of action, but movement by itself is not sufficient. Action also must have preparation, a plan, and a purpose. [Roth]

The purpose is your final outcome goal – the reason and the desired result of your action.

The plan is your process goal – the steps you will take to reach your destination.

Preparation is the thinking part of action as you consider where you are vs. where you want to be, and you identify the resources you’ll need to get there.

Remember, there is a difference between working for a goal and doing busy work. Movement for the sake of moving is not your objective. Your movement needs to be incorporated into your bigger Action plan.

Work In The Right Jungle

In The 7 Habits Of Highly Effective People, Stephen Covey tells the story of some workers busily cutting their way through a dense jungle. The leader climbs a tree, surveys the surroundings, and sings out: “Wrong jungle!” “Shut up,” the workers shout back. “We’re making progress!” [Covey]

Some people aren’t following any plan. They do whatever is before them each day, never thinking about where they are ultimately heading. Others have a plan and they take steps to follow their plan. This is movement in a sense, but if they are not paying attention to the end result, they may not end up where they think they are going. “Wrong jungle!”

Remember the components of Excelerated Action™ and follow your process while keeping a weather eye on your desired end result. That is taking Excelerated Movement™ in pursuit of your goals. And that is embracing the Excelerated Life™!