Do you prefer winning once in a while or winning every day? That’s a difference between having a goal and having a system.

“. . . as far as I can tell, the people who use systems do better. The systems-driven people have found a way to look at the familiar in new and more useful ways. To put it bluntly, goals are for losers.” ~ Scott Adams

Goals are for losers? That’s a pretty odd statement for me to endorse as someone who spends his working time helping and encouraging people to set and achieve goals. However, after reading this in How To Fail At Almost Everything And Still Win Big by Scott Adams, best-selling author and the creator of the Dilbert comic strip, I have to say he has a good point.

As Adams points out, if you have a goal that you are working toward, you spend every moment up until you achieve the goal (if you ever do), feeling like you haven’t made it yet. “In other words,” says Adams, “goal-oriented people exist in a state of nearly continuous failure that they hope will be temporary.” And when you do achieve the goal (if you ever do), you celebrate in the moment but soon realize you no longer have the objective that was pulling you forward and giving you a sense of purpose.

But isn’t this just word play? Don’t most goal-oriented people use a system to reach their goals? And aren’t most systems comprised of a goal or goals?
Well, in a sense, yes. The big difference comes down to perspective (as do most things) – how you think about them.

Says Adams, “. . . thinking of goals and systems as different concepts has power. Goal-oriented people exist in a state of continuous presuccess failure at best, and permanent failure at worst if things never work out. Systems people succeed every time they apply their systems, in the sense that they did what they intended to do. The goals people are fighting the feeling of discouragement at every turn. The systems people are feeling good every time they apply their systems. That’s a big difference in terms of maintaining your personal energy in the right direction.”

So from this perspective, a goal is a one-and-done, pass or fail endeavor while a system is a behavior that is repeated over and over and over, day after day after day. Of course there are steps you must take to reach your goal, but by Adams’ definition, the steps aren’t the goal – only the destination. However the steps could be your system.

“If you do something every day, it’s a system. If you’re waiting to achieve it someday in the future, it’s a goal. . . For our purposes, let’s agree that goals are a reach-it-and-be-done situation, whereas a system is something you do on a regular basis with a reasonable expectation that doing so will get you to a better place in your life.”

Losing 10 pounds is a goal. You only win when the scale shows you are 10 pounds lighter than when you started. Adding more daily activity is a system. You win (and you feel increasingly more energetic) each day as you become more active.

Focus on the ball

Systems are an excellent partner for mini-habits — those tiny, too-small-to-fail habits that can add up to big improvements. You can take your system and turn the steps into mini-habits and eventually make the whole process automatic. That is powerful.

Here is a recap of the principles for creating mini-habits.

2. Break your system down into steps that can be transformed into mini-habits. If you want to write 10,000 words each day, start with 50 words or some number that you will do every day. As the practice starts to become a habit, gradually increase the number of words. Do this slowly — consistency is key. Don’t set a number that looks good, but which you won’t do.

Forget the gold — go for the daily win!

Are goals for losers? Obviously not in every case. People who reach their goals, especially in a big way — think gold medal winners at the Olympics — receive our acclaim and often our envy. Chances are, though, they have followed a system. And for every gold medal winner, there are many competitors who don’t win the gold. But if they have followed their system, they can still feel successful and good about themselves.

Excelerated goal setting — planning and achieving BIG goals — is one step in creating your Excelerated life, a life of well-being, meaning, and purpose.

Adams, Scott. How To Fail At Almost Everything And Still Win Big. New York: Penguin Books, 2013 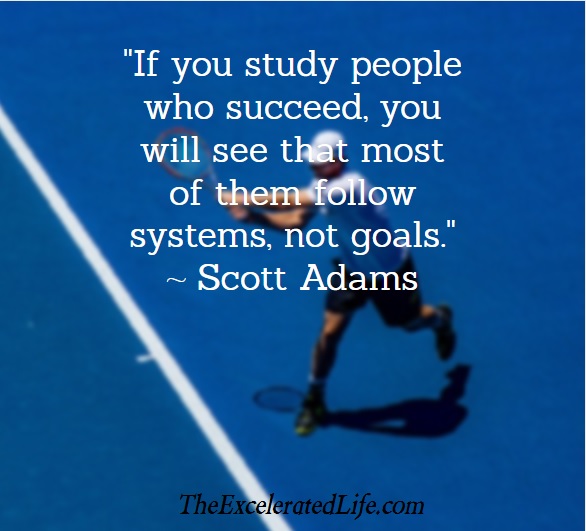 3 Replies to “Goals Are For Losers”