“If you chase two rabbits, both will escape.” ~ Source obscure

The Joke’s On Me

My daughters love to play practical jokes on me. The April Fool’s Day tricks they have orchestrated over the years have become legendary to my friends.

One morning, and not April 1, I got in my car and turned the switch. The car sprang into life! The lights came on, the wipers started beating back and forth, the blinkers started blinking, the heater sent out a blast of air, the radio blared. Those little stinkers had turned on everything they could in my car.

At first I was startled, then I considered going in and jerking them up out of bed, then I laughed. That’s when I had a flash of insight.

I have kept a journal consistently for the last two years. It helps get my day started in the right direction. Nearly every morning, I get up and I write my major definite aim, my purpose, my guiding principles, then I write my goals for the year, for the month, for the week, and for the day.

As I looked through my journal and back over my calendar, I realized that I have been a busy, busy person this year doing many different tasks related to my goals. But I have made little real progress. It occurred to me that I have been trying to focus on too many things. I have been diffusing my efforts.

In Essentialism: The Disciplined Pursuit Of Less, author Greg McKeown includes a diagram that is similar to this: 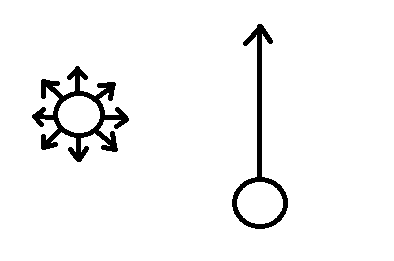 McKewon says, “The difference between the way of the Essentialist and the way of the Nonessentialist can be seen [in the diagram]. In both images the same amount of effort is exerted. In the image on the left, the energy is divided into many different activities. The result is that we have the unfulfilling experience of making a millimeter of progress in a million directions. In the image on the right, the energy is given to fewer activities. The result is that by investing in fewer things we have the satisfying experience of making significant progress in the things that matter most.”

Perhaps you, like me, are attempting to work on too many goals at once. They may be worthy and important goals but if you are diffusing your energy in many directions, you end up spinning your wheels. Much better (as I now realize) to focus all your efforts on one objective. You can get to the others later.

Or perhaps you don’t have any goals? You are diffusing your energy by default because you have no target to aim for.

Find The ONE Thing

“You cannot overestimate the unimportance of practically everything.” ~ John Maxwell

When it comes to deciding what to work on, I suggest using the “Focusing Question” from Gary Keller’s book The ONE Thing. “Everything doesn’t matter equally,” Keller says.

The idea is based on the Pareto Principle, also known as the “80 / 20 Rule”, which states that the majority of results (outputs) come from a minority of actions (inputs). Or to state it another way, separate the vital few from the trivial many.

Keller invites us to go one step further and separate the vital 1 from the vital few. Thus, the “Focusing Question”: “What’s the ONE Thing I can do such that by doing it everything else will be easier or unnecessary?”

A Small Change With Big Results

I also have 1 monthly goal and 1 weekly goal. My daily “goals” are actually tasks that are steps toward my weekly, monthly & yearly goal.

As soon as I made this change, I felt a surge of energy. I’m doing no more than I did before, but now all my activities are aimed in the same direction — not spread out over many different objectives.

If you, like me, find you are attempting to pursue too many goals at once and are making little or no progress on any of them, I invite you to consider narrowing your focus to the ONE goal that will make the biggest difference for you right now.

1. Set aside a time when you are free from distractions — turn off your phone, log out of e-mail, step away from the internet.

2. Review your current goals and select the one that is most important to you right now.

3. Ask and answer the Focusing Question: “What is the ONE thing I can do that will make everything else easier or unnecessary”?
[For more on this, see Ask A Big Question.]

Slow Down To Go Fast

Activity is not the same as productivity. You can mark numerous items off your “To Do” list and still have little to show in terms of progress toward your BIG goal.

Don’t be the busy, busy person that is involved in many activities, yet going nowhere. “Things that matter most,” said Johann von Goethe, “must never be at the mercy of things that matter least.” Rather than diffuse your energy going in a multitude of directions, focus on your “thing that matters most”. That is embracing the Excelerated Life!

Excelerated focus — aligning your actions with your true desires — is one step in creating your Excelerated Life, a life of flourishing, of well-being, meaning, and purpose.

One Reply to “Why You Need Focused Energy”