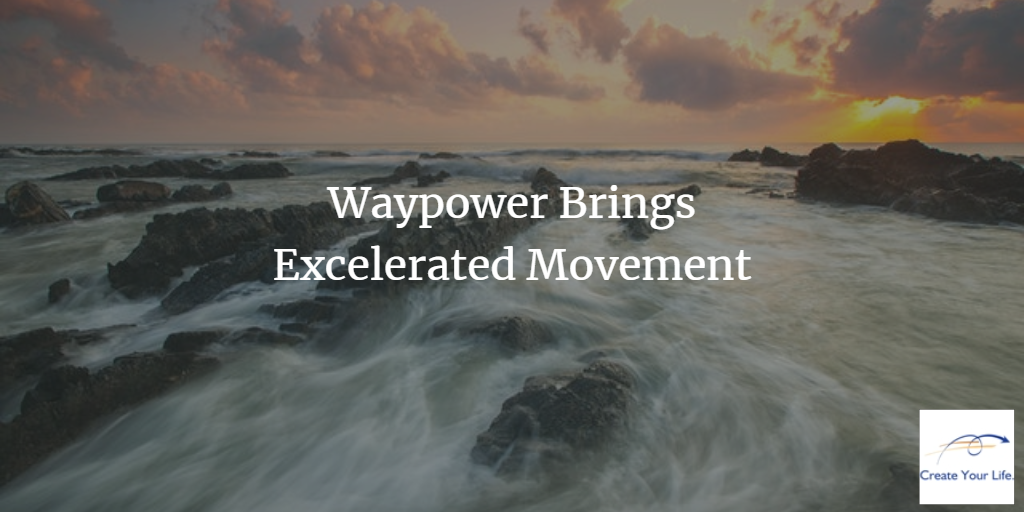 Hope has three components: A goal to make your future better than the present, the belief that you have the power to make it so, and multiple pathways to achieve that brighter future. “Waypower thinking” enhances your belief in your ability to generate multiple routes to reach your goal. This is a key to Excelerated Movement™.

Karen (not her real name) had a BIG goal. An engineer at an international company, she was not satisfied in her job. What she really wanted to do was to start her own company providing personalized custom products for weddings, anniversaries, and other celebrations. She enjoyed designing place cards, stationery, invitations, thank you cards, and so forth. She found helping others plan and prepare for these life events to be fulfilling.

Karen had worked with a consultant to develop a business plan to launch her business. The problem she had was that the business plan explained what she would do, but it didn’t tell how she would put the plan into action. She was doing some small jobs for family and friends, but she had not been able to make the transition from full-time employee to successful business owner. She was stuck.

“You can have the most specific of goals, as well as the willful determination to reach those goals, and still be stuck.” ~ Rick Snyder

Perhaps you’ve experienced something similar to Karen’s situation. Maybe you felt frustrated or blocked. You had one idea but it didn’t work so you’re not sure what to do next; you’ve been unable to come up with a workable plan.

If things aren’t turning out as well as you had envisioned, your only plan hasn’t worked out, and you don’t know what to try next, then you need “enhanced waypower thinking”, the belief in your ability to generate multiple routes to reach your goal. [Snyder]

Recall that hope has three components: (1) You believe your future will be better than the present. (2) You believe that you have the power to make it so. And (3) you can envision multiple routes to achieve that brighter future while accepting that there will be obstacles to overcome, whatever the path.

Waypower is the ability to think up the plans essential to having hope. It is, Rick Snyder writes, “a mental capacity we can call on to find one or more effective ways to reach our goals.” [Snyder] And waypower is the belief that we can “engage in planful thought” to produce multiple routes to our goal. When you see many ways to reach your goal, if Plan A doesn’t work, you have Plan B, then Plan C, Plan D, etc., etc.

As you plan keep this in mind: if things are easy, we’ll keep doing them. If they become hard to do, we’ll stop doing them. When you learn how to remove barriers, for example by moving from Plan A to Plan B, you’ll “easily be able to keep doing things.” [Young]

In fact, Sean Young points out in Stick With It that there are three ways to make things easy: control your environment, limit your choices, and have a road map, i.e., a plan, or as we’ve seen, multiple plans at the ready.

However, it is difficult to have a good, working plan if your goal is unclear. Vague goals are destined to fail because you can’t sufficiently plan for them. If you don’t know where you’re going, how can you develop a map to get there?

But you can develop plans for clear and definite goals by creating SMART+Plus Goals.

Moving From Goals To Actions

Similarly, having a BIG and definite goal is, as they say. “necessary but not sufficient”. How do you implement Excelerated Movement™ in pursuit of your goals?

You start by having plans (not “a plan” but plans). Next, to move from goal to plan to action, identify the first step. Then, says Young, “put all of your energy into achieving that first little step. Take the time to reflect on your progress. And then repeat.” [Young]

You can talk all day about your goals, your strategy, or your plans, but it means nothing until you “align those with where you actually expend your time, money, and energy.” [Christensen] Change starts with movement.

We are often told that a change in thinking will result in a change in behavior. I’ve used the T-BEAR model for years to illustrate the relationship between thoughts and results, as in Thoughts > Beliefs > Emotions > Actions > Results. But I later amended it to more clearly show that the influence goes both ways. Thoughts <> Beliefs <> Emotions <> Actions <> Results.

Before You Charge Ahead

Action is one part of Excelerated Movement™ but “no action” is the other side of the coin; yin and yang – action and no action, effort and no effort.

Action includes writing, dancing, sending an e-mail, researching, planning, calling, studying. Or from the wisdom of Holiday Mathis, “air must be moved, words spoken, written or sung, action and work of any kind must be completed”.

Also necessary are the “blank spaces in between” [Renner] = listening, observing, waiting, rest and recovery. Accept delays as if inevitable – they are. This is not “dead time” but time you can use to reconnect with your goals or simply rest and recover and learn to be with yourself.

You and I are the links between our ancestors and our descendants. “Individually and collectively, we are time travelers who, for better or worse, are making a difference in what happens next. If our goals and our actions, our ‘waypower’, only benefit ourselves, we risk spreading unhappiness, divisiveness, fear, aggression, and destruction.” But if we “are filled with hope for shared goals, however, our legacy will be a positive one.” [Snyder] It is then we are giving our best in Service to the world. It is then we are embracing the Excelerated Life™!

Snyder, Charles R. The Psychology Of Hope: You Can Get There From Here. New York: The Free Press, a Division of Simon & Schuster, 1994.