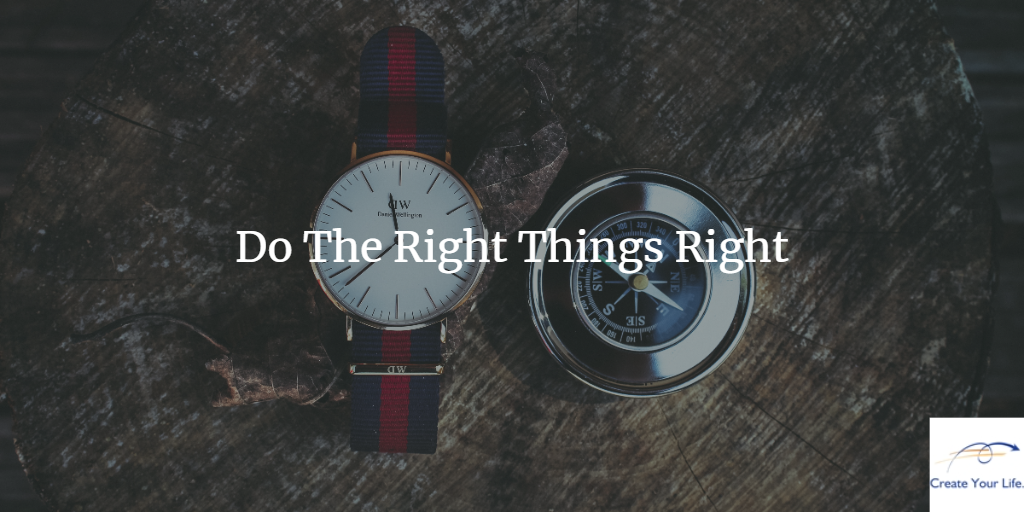 Both the clock and the compass are important to managing our time and our lives. You must first use the compass to be sure you’re heading in the right direction. Let your compass tell you what truly matters. Then the clock can help your efficiency in doing the right things right.

Remember this story? Once upon a time, there were three little pigs . . .

As you’ll recall, the first pig built a house of straw. He collected his materials, got right to work, and had a shelter by the end of the day. Very efficient.

The second pig built a house of twigs. He, too, didn’t waste time and got his house built relatively quickly in a few days. Still quite efficient.

The third pig built her house of bricks. She worked consistently, day in and day out, no wasted time, no wasted effort. It took her longer to build, but she, too, was an efficient worker.

Of course, you know what happened when the wolf came. Remember? Only one of the three houses was left standing and offered protection to the little pig and her brothers. All three were efficient, but only one was effective. (I guess you could also say the wolf was pretty effective at destroying straw and twig houses.)

You can be really efficient – getting your house built in a day. But if you are not being effective, that is, doing the right things, while you’re being efficient, you are not likely to make much real progress – and the wolf will blow down your house.

You Can’t Do Everything

One of the primary reasons to go for effectiveness is for the simple fact that you cannot do everything, even the things that are important to you. You may be both effective and efficient, but you’re still going to have to leave some things undone.

“Even the relatively privileged among us rarely get around to doing the right things,” writes Oliver Burkeman in Four Thousand Weeks: Time Management For Mortals. “We sense that there are important and fulfilling ways we could be spending our time, even if we can’t say exactly what they are — yet we systematically spend our days doing other things instead.” [Burkeman]

That means it’s crucial that you know what the “right” things are. And that you make the distinction between being effective and being merely efficient.

Therefore, before you engage in “time management” and scheduling what you’ll do when, you first must go deeper and decide what truly matters to you. It’s the only way to be sure that the activities and tasks you engage in are the ones that move you in the direction of your goals and the life you want to create.

Because, as James Ryan warns, we can easily get caught up in our everyday routines and lose sight of what truly matters. Or we lack confidence in our capability to do what must be done, or we’re stressed out, and we look for distractions and those things that are easy to do. “In each of these situations, it is useful to ask yourself what truly matters. Doing so can help you dispense with routines, muster the courage to face difficult work, and help you regain enough calm to identify what is truly important.” [Ryan]

Don’t get lost in “the thick of thin things”. On the cover of Stephen Covey’s book First Things First, there’s a picture of a compass over top of a clock. Both are important to managing our time and our lives. But you must first use the compass to be sure you’re heading in the right direction. Only then can you decide how best to use your time.

Let your compass tell you what truly matters. Then decide which task is most important to work on.

Using your compass before using your clock helps ensure you are going in the right direction. And here, we mean “right” in the sense of morality and ethical conduct.

In Buddhist teachings, Right Action is one of the aspects of the Noble Eightfold Path to enlightenment. Right in this case is “right” in the sense of being “upright” or “virtuous”. [O’Brien]

In “Doing Things Right Vs. Doing The Right Thing”, reporter Yen Makabenta writes:
“To do ‘the right thing’ means to make a choice among possibilities in favor of something the collective wisdom of humanity knows to be the way to act . . . we believe that somehow out of all the myriad possibilities in a complex world there is something we can call ‘right action’ in a given situation.” [Makabenta]

As we look to be effective and efficient, let us keep in mind that doing the right thing isn’t only a personal choice; there is a broader choice, a moral and ethical choice to make as well.

So, how can you avoid false productivity? Here are some ideas. [Stack]

When you and I are being truly productive, we are effective – doing the right thing. And we are efficient – doing things right.

But that isn’t the only choice. If we’re not paying proper attention to our decisions and our actions, we risk taking off in the wrong direction.

Doing the right thing wrong. Let’s think back to our piggy friends, specifically the mason, building her brick house. A few years before, when she knew nothing about bricklaying, she tried to build a house. But the walls leaned at crazy angles and didn’t even meet at one corner; there was a wide crevice of several inches. It was not a sturdy house. Fortunately, the little pig took a bricklaying class and soon was a top-notch mason.

How about you? You probably aren’t trying to build a brick house (although you could be) but are there other skills you need to learn or polish up to move toward your goal? You may be doing the right thing, but if you’re doing it wrong, you’re not making much progress.

This scenario is mostly what we’ve talked about in this essay. If you’re doing things efficiently but they are not at least some of the things that move you forward, you are engaging in false productivity.

Finally, there is doing the wrong thing wrong. If our little pig friend had built a scarecrow out of his straw, instead of a house, well, he would not be here today. I suppose he could have built a scarewolf, but I don’t think those had been invented yet.

Recall Stephen Covey’s Time Management Matrix and the four quadrants. If you are doing the wrong things wrong, you are basically working in Quadrant IV, tasks that are not urgent and not important. And whether you do them right or do them wrong, you’re basically wasting time. Don’t do it.

I hope you agree that it’s important to do the right things right, because your time is limited, and “doing anything requires sacrifice – the sacrifice of all the other things you could have been doing with that stretch of time. If you never stop to ask yourself if the sacrifice is worth it, your days will automatically begin to fill not just with more things, but with more trivial or tedious things . . . Commonly, these will be things that other people want you to do, to make their lives easier, and which you didn’t think to try to resist.” [Burkeman]

Excelerated Productivity™ — improving efficiency and effectiveness — is one step in creating your Excelerated Life™, a life of flourishing and well-being, and a life of meaning, purpose, and service.