Recently, we talked about the benefits of breaking negative habits. I shared a few unhealthy habits I used to have and expressed gratitude that I was able to replace several of them with more helpful and healthful ones. I shared a list of some negative habits identified in an article in Inc. magazine and invited you to consider if there are any habits keeping you from making progress toward your Excelerated Life.

On the outside chance that you may have 1 or 2 negative habits you’d like to replace with more beneficial ones, let’s consider some recommended and proven ways to break negative habits.

In The Power of Habit, Charles Duhigg tells us that a 3-step process in our brains, which he calls the “habit loop”, is how we develop habits. [Duhigg 29] The habit loop consists of 1) cue, 2) routine, and 3) reward. For example, when I was a smoker, I had multiple cues for lighting up . . . drinking coffee, drinking beer, finishing a meal, starting a fire in the fireplace — and probably others that I no longer remember. Any of these cues could make me perform the routine of lighting up — take out a cigarette, tap the end, take out my lighter & light up, inhale. The reward, of course, was the physical hit of nicotine but also the psychological reward – the relaxing and feeling of ease – that feeding an addiction brings. All our habits, according to Duhigg’s research, follow this pattern. Some have one cue, some – such as my smoking habit – can have multiple cues. It seems pretty obvious that breaking the loop is the key to breaking the habit. Easy to see, not easy to do.

From WebMD, I found a 3-step process to break unhealthy habits. This process can help disrupt the habit loop and give you a chance to replace a negative habit with a positive one.

Step No.1: Make It Conscious

In order to break the loop, you must be able to identify when you are being cued to begin the habitual behavior. Is it at a particular time of day? When you are with certain people or when you are alone? Are there specific actions that initiate the loop? Becoming conscious of the cues is the necessary 1st step in breaking the habit.

Step No. 2: Put It in Writing So It Really Sinks In

“If you can’t measure it,” said business guru, Peter Drucker, “you can’t improve it.” This is a method to follow up on step 1. Just as keeping track of a desirable behavior helps you develop a habit, keeping track of an undesirable behavior can help you see just how often you engage in the behavior — it can shed the light of reality on just how pervasive the behavior is. It can turn “I smoke about a pack a day” into the more accurate “What? I’ve smoked 2 & 1/2 packs today!?” Logging the behavior can encourage you to do it less. If you write down how many cookies you ate today (as you are eating them), you’ll likely have a few rather than 1/2 the package.

Step No. 3: Bait and Switch

This step deals with changing the routine. Research tells us that it’s very difficult to stop a negative habit outright – it is easier to replace a negative habit with a positive one. When I was breaking my smoking habit, I replaced lighting up with chewing gum. Unfortunately, I then developed several cavities in my teeth that I had to have filled. Still, it was healthier than smoking and I eventually stopped the gum, too. You might replace the habit of snacking on junk food with healthy snacks – vegetables, fruit, and nuts. Or replace the habit of mindless internet surfing or watching too much TV with an activity that allows you to move your body . . . taking a brief walk or doing a few minutes of yoga or stretching. You get the idea – find some new thing you can turn into a routine when the habit cue(s) come up.

As you prepare to tackle your own unhelpful habits, keep these pointers in mind.

o  You have to want to stop them. Remember, the negative habits carry some reward (else they wouldn’t have become habits). You must decide if the reward is worth the cost over time. One cigarette won’t kill you. One cookie won’t make you obese. Similarly, avoiding one cigarette or one cookie won’t have any noticeably beneficial effect on your health. But look at the results of each action over time. Which one — which reward — serves you better in the long run?

o  Tell somebody. Consider this statistic from the American Society for Training and Development (ASTD). It indicates how likely you are to follow up on something, when you:
* Hear an idea – 10%
* Consciously decide to adopt an idea – 25%
* Decide when you will do it – 40%
* Plan how you will do it – 50%
* Commit to someone else that you’ll do it – 65%
* Have a specific accountability appointment with the person you committed to (“I will call you on Tuesday and let you know my progress”) – 95%

The huge jump in the success rate shown in these statistics speaks to the power of accountability. Do you want to stick to your new habit? Tell somebody.

o   When things go wrong. Inevitably, something will go worgn, er, wrong. Don’t give in to “all or nothing” thinking . . . “I ate a 1/2 gallon of ice cream, I’ve blown my diet. Might as well eat this bag of cookies, too. I’ll never lose weight anyway.” Use this phrase which I have seen a number of times lately: “It isn’t win or lose — it’s win or learn.” Admit that you messed up, learn the lesson and get back on track . . . “Wow! I just ate a 1/2 gallon of ice cream?! That’s not like me! I’ll definitely have my normal salad for dinner.”

o  Reward yourself early and often. There must be some reward for performing a habit routine if you hope to continue it for the length of time required to create the habit behavior. The end result of a new habit may be months or years away — there’s nothing there to keep you motivated day-to-day. Find some ways to reward yourself each time you complete the habit loop. Be sure the reward itself doesn’t contribute to another negative habit.  For example, don’t reward your work out with a candy bar.

The reward can (and probably should) be small and simple – reading something you enjoy for 10 – 15 minutes; watching a funny YouTube video (or your favorite Grumpy Cat episode); taking a few minutes to be quiet and relaxed. The results of your habit will be a reward as well. I like to chart the habit behaviors I am working to instill. I can look back over the record and see how far I’ve come. This keeps me in the mood to keep going.

Use the power of the Habit Loop.

Is it that simple? Not usually. It took me 3 tries over several years to break my smoking habit. I did it cold turkey, without the benefit of most of the knowledge we have today. I count among my friends and acquaintances people who have broken addictions to smoking, alcohol and other drugs. Make no mistake — there will be times when you will struggle. But tapping into the power of the Habit Loop and using the information gained from research can help you succeed. You can replace unhelpful and unhealthy habits with habits that lead to health and well-being. That is living the Excelerated Life! 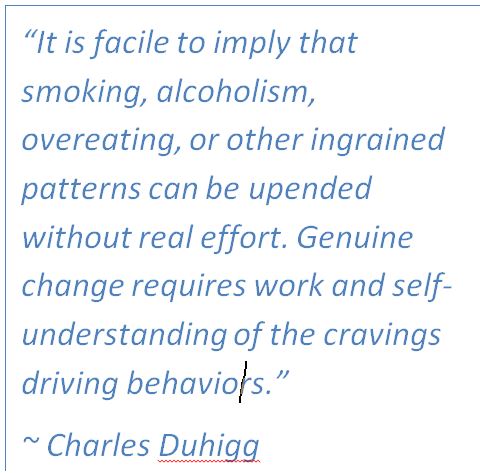