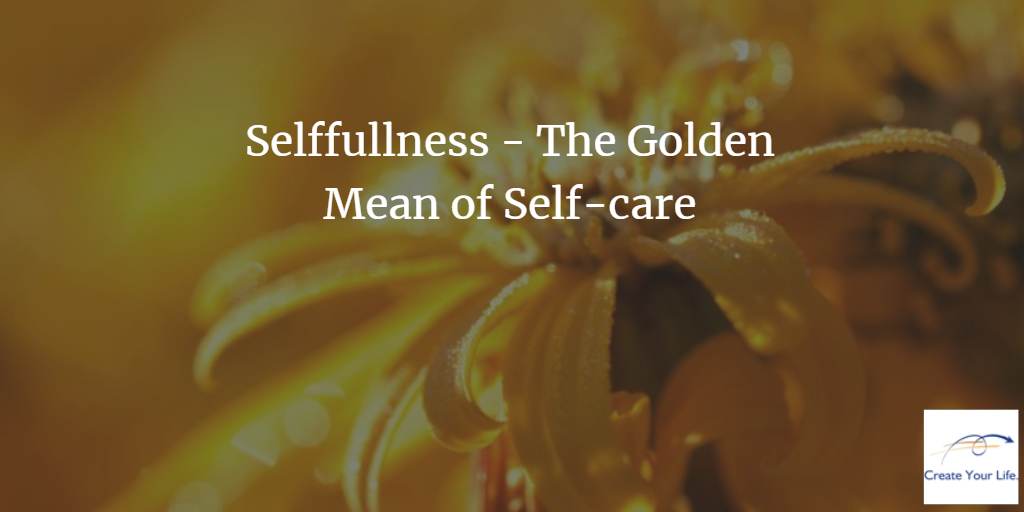 We have been conditioned to see selflessness as “good” and selfishness as “bad”. Consider the viewpoint that neither one is good or bad but are extremes of behavior, two sides of the same coin. Take excellent care of yourself, not as a selfish or a selfless act, but so that you can give your best in Service to the world.

Once upon a time, a dying father called his three sons to his bedside. “I am old and weary,” he told them, “and my time here is done. But before I go, I want my sons to have these magic potions.”

The boys saw two bottles on a bedside table. One bottle was labeled “Industrious”, the other, “Lazy”.

“For those who drink of these potions sparingly,” the old father continued, “good fortune will be theirs. But beware of drinking too much of either for that way leads to ruin.”

The three sons said goodbye to their father, the eldest picked up the bottles, and they walked out.

“Let’s see what these taste like,” the eldest son said, handing the other bottle to his baby brother. They unscrewed the caps.

“Remember what Father said,” the middle brother cautioned. “We should only drink a little.”

The older brother drank a sip of the “Industrious” potion, while his younger brother tasted the “Lazy” elixir. They were sweet and fizzy and tickled the tongue. “Nonsense!” they cried. “This stuff is delicious!” And each one guzzled most of the bottle.

Shortly thereafter, the potions began to take effect. The eldest brother focused in and set to work. He worked tirelessly, night and day. He made huge gains in his career. He worked out, sometimes twice a day. He spent time with his family. He enjoyed great success. For about two weeks. Then, from lack of rest and rejuvenation, his body gave out. He was burned out, broken, and unable to perform even the simplest tasks. His successes, his relationships, his health, all evaporated.

On the other hand, the youngest brother had turned “resting” into an art form. He became so indolent he could barely get out of bed. His house and surroundings deteriorated to a trashy mess. His work life was nonexistent and his income dried up. He had no energy and no interest in spending time with his family or taking care of himself. Within two weeks, his life, his relationships, and his health were in shambles, but he was too lazy to care.

However, the middle brother, who had taken a small taste from each bottle, thrived. He began to cycle through times of hard, focused work, then took time to rest and fully recover. His house and surroundings were immaculate. His business was booming. He spent lots of quality time with his family and loved ones, while also taking excellent care of himself. Cycles of work. Cycles of rest. And these periods of alternating activity and recovery allowed the brother to live this way for many good years.

In his philosophy, Aristotle emphasized the golden mean or golden middle way as the desirable midpoint between two extremes, or “vices”. The mean is the virtue. Too little of the virtue is the vice of deficiency. Too much is the vice of excess.

The Golden Mean of Selffullness

Now consider the traits of being selffull, selfless, or selfish.

According to the Free Online Dictionary, selfless means: “having, exhibiting, or motivated by no concern for oneself”.

At the other extreme, we have selfish, which means: “concerned chiefly or excessively with oneself, and having little regard for others:”.

We could say the vice of deficiency is to be selfless. The vice of excess, then, is selfishness. Selffullness is the golden mean between the two vices of selflessness and selfishness. What does that look like? Let’s look at three areas: time, work and family, and money.

How does the selfless person use time? We might see them giving large chunks of their time working as a volunteer or taking care of others, perhaps even doing things for other people – especially a spouse or child – that the other person could do for themselves. They neglect their own needs and self-care because they are too busy caring for others. They are “motivated by no concern” for themselves.

And how about the selfish person? They give little or no thought or time to anyone other than themselves. Even when they offer to help another person, it’s because they expect to get something in return or to make themselves look good in front of others.

The selffull person takes time to ensure her own needs are met but not to the exclusion of others. She is neither focused exclusively inward on herself nor outward on others. By taking care of herself, she is able to make large gifts of time in doing for others and in pursuing her purpose of giving her best in service to the world.

Selffullness and Work and Family

Similar to the use of time, the selfless person gives himself unceasingly to work and to family. He gives little regard to his own desires or health, putting his job and/or his family first and often struggling with the balance. If he gives too much of himself to work, he feels guilty about neglecting his family. If he takes time for his family, his mind is on his work. No matter which one he focuses on, he feels like it isn’t enough.

The selfish person may not have a problem with balancing work and family. She is apt to choose whichever brings her the most fulfillment at the expense of the other. At work, she is not one to share praise or plaudits. She wants all the recognition. She sees her family as a reflection of herself and expects perfect behavior. She may lavish her children with gifts, not for their sake but to make her look good.

How does the selffull person approach work and family? She looks for ways to interact at work that build relationships, for the good of everyone involved and for the good of the company. She makes her family a priority, not just for her own good, but to nurture her relationships with each person. She has no problem with balancing work and family. She understands that sometimes one will take precedence over the other, but she chooses based on her values, not on which makes her “look good”, and not trying to do everything to the detriment of all.

Let’s look at how a selfless person, a selfish person, and a selffull one might approach money.

As you might imagine, the selfless person is apt to give away sums of money, even to her own detriment. It could go to help family members, to charities, or to a homeless person on the street. Of course, there is nothing wrong with helping others less fortunate or helping family members when they’ve hit a rough patch. The selfless person gives without regard to her own needs though, to the point of doing without small luxuries, or even necessities.

The selfish person we sometimes call tight-fisted, stingy, a “cheapskate”. He sees life as a zero-sum game, believing there is only so much to go around. If someone else gets more, that means less for him. He is not apt to give money away, but when he does, it is to bring attention and acclaim to himself. And he will never give it away if it means having to give up anything.

In contrast to these two ways of thinking, the selffull person sees money as a tool to use or as energy to circulate, not waste or hoard. She shows generosity and uses her money in her own best interest AND the best interests of others. She cultivates an abundance mindset, as opposed to the servile mentality of the selfless person or the scarcity mindset of the selfish person.

A Mixture of Traits

In some cases, the three types engage in the same actions but the attitude or the thoughts behind the actions are different. The selfless person might perform the actions from a sense of obligation. The selfish person performs them expecting something in return. The selffull person does them from love.

Now, these are extreme examples used to show the difference between a purely selfless person and a purely selfish person. And in reality, few if any of us are purely one or the other. As humans, we are a mixture of traits. However, it helps to be aware of which side you tend towards – the vice of deficiency or the vice of excess – as you seek the golden mean of selffullness.

Now, over to you. Look at your own self-care practices. Are you finding the golden mean? Most of us I believe err on the side of selflessness but don’t you do either.

Take a few minutes and think about these questions.

Do you see selfless OR selfish tendencies in any of these areas? What steps could you take in each area to move closer to the selffullness golden mean?

Take Excellent Care of Yourself

Our upbringing and culture condition us to see selflessness as “good” and selfishness as “bad”. Let us, however, consider the viewpoint that neither one is good or bad but are extremes of behavior, two sides of the same coin. Then, let’s decide to approach the golden mean, that which we call selffullness.

Take excellent care of yourself, not as a selfish or selfless act, but so that you can give your best in Service to the world. That is embracing your Excelerated Life™!

Excelerated Selffullness™ — taking excellent care of yourself — is one step in creating your Excelerated Life™, a life of flourishing and well-being, and a life of meaning, purpose, and service.