A parable of the seeds

“A farmer went out to sow his seed. As he was scattering the seed, some fell along the path, and the birds came and ate it up. Some fell on rocky places, where it did not have much soil. It sprang up quickly, because the soil was shallow. But when the sun came up, the plants were scorched, and they withered because they had no root. Other seed fell among thorns, which grew up and choked the plants, so that they did not bear grain. Still other seed fell on good soil. It came up, grew and produced a crop, some multiplying thirty, some sixty, some a hundred times.” (Mark 4: 3 – 8 NIV)

A parable of stones thrown in water

A young child sat by the bank of a pond. The child held a number of small stones in her hand. The child tossed one of the stones in the water and watched as ripples went out across the pond in ever-growing circles – larger and larger. She tossed in another, then another, and watched in delight as the ripples grew and ran across the surface of the water, sometimes overlapping, sometimes converging and then moving away from each other. The ripples moved all the way across the pond, much further than the child could have tossed one of her stones.

Have you ever been stuck – unable to move forward on a goal, an idea or a project – because you didn’t know the right step or the best step to take? So you did nothing. That doesn’t get you very far, does it? I’m sure you’ve heard me repeat this quote more than once: “I have a firmly-held belief that it is better to do the wrong thing than nothing. Any action you take will lead you closer to your goal.” ~ Cathy Stucker, the Idea Lady

Imagine you were standing in the end zone of a football field with a dart in your hand. Suppose you were looking at a target board in the other end zone on the opposite end of the field. And suppose you wanted to throw the dart and hit the bull’s eye on the target. If you wait till you have a good strong wind at your back and you wait till you get special glasses that allow you to see the target better and you wait till you read up on how to throw a dart and you wait till you get the opinions of all your family and friends about the best way to throw a dart . . . you’ll be waiting a long time, maybe forever. Throw the damn dart! It may only go 15 feet but now you get feedback from the Universe in the form of a course correction. Now you get to go stand where the dart fell and throw again. Each time you throw, you get to change positions based on where the dart falls. Can you see that eventually — maybe sooner than you think! — if you throw the dart enough times, you’ll hit the bull’s eye?

In The Art of Taking Action, Gregg Krech says: “So when we are confronted by indecision, we need to take action despite our doubts or confusion. We need to move forward, even if we’re only taking small steps. Those steps, regardless of which direction they go in, are likely to give us new information and experience. Our actions send ripples into the world. The situation may change or reveal itself in a new way once we have moved to a new vantage point.”

Making ripples. Sowing seeds. Some of the seeds you sow won’t take root. Some will spring up but will soon wither and die. But some will flourish. Here’s the thing — you don’t know which ones. You need to plant a lot of seeds.

Not everyone wants to take such small steps. Some people are not content to toss small pebbles into the pond . . . they want to throw a big rock & get it done! And that’s perfectly fine. But I’m not talking to those folks right now. I’m addressing those of us who let days and weeks and months – and sometimes years — pass while we think about what we could do but find it difficult to actually get started. So, if this is you, I encourage you to start today. Pick the ONE thing that could make a big difference in your life. Now what is one thing you can do each day to move you closer to your ONE thing? Take the 1st step. Tell your loved one 1 thing you love about him or her. Substitute 1 healthy food for 1 unhealthy food. Do 1 push up. Throw away or give away one item that no longer serves you. Spend 5 more minutes implementing a productivity tool. Write 50 words. Do 5 more minutes of research. Remember, consistency trumps effort. Make your step small enough that you will do it every day and don’t miss a day. When this small step develops into a habit, intensify your effort slightly. Keep building on the foundation you have started. Day by day. Pebble by pebble. Seed by seed. That is embracing the Excelerated Life!

Taking Excelerated action in pursuit of your goals is one step in creating your Excelerated life, a life of well-being, meaning, and purpose. 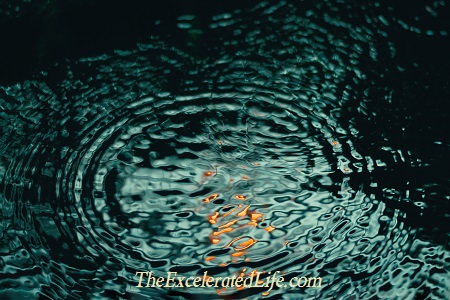