“It’s not that you don’t know what to do, but rather that you don’t have the discipline to make yourself do what you should do, whether you feel like it or not.” ~ Brian Tracy

Your Chances For Parole May Vary

Pretend for a moment that you are a prisoner about to appear before a judge to request parole. (It’s a stretch I know, but use your imagination.) When would you want to go before the judge? First thing in the morning? Right before lunch? Middle of the afternoon? Last case of the day?

In a study released in 2011 of parole decisions made by a group of judges in Israel, it appears that the timing of the parole hearing can have a material effect upon whether an individual is released or not. [Danziger, et al]

The researchers found that the chance of a prisoner receiving a favorable hearing and parole was about 65% for the first case of the morning and declined for each subsequent case. The declining chances for a parole dropped eventually to nearly 0% until the judge took a break and ate a snack (a sandwich and piece of fruit). After the break, the likelihood of parole jumped again to about 65%, then declined until lunch. Similarly, after lunch, the chances of a prisoner receiving parole rose again to around 65%, then steadily declined until the end of the day. The prisoners who received hearings before the break, before lunch and at the end of the day had a nearly 0% chance of receiving parole. [Danziger, et al]

Roy Baumeister, a social psychologist who is well-known for his work on willpower and self-control, identifies one factor that is at play in the varying decisions by the judges . . . willpower. Specifically, the depletion of willpower caused from having to make important, life-changing decisions.

“Judging is hard mental work,” Beaumeister writes in the book Willpower – Rediscovering The Greatest Human Strength, which he co-authored with John Tierny. “As the judges made one decision after another, their brains and bodies use up glucose, that crucial component of willpower . . . Whatever their personal philosophy – whether they were known for being tough on crime or sympathetic to the potential for rehabilitation – they had fewer mental resources to make further decisions.” [Beaumeister, p. 90] This depletion of resources led the judges to make “safe” decisions by, in this case, denying parole.

Why is willpower important?

Self-regulation – willpower – is an important strength to develop. In fact, developing other strengths and skills often depends on our practicing them when we don’t really want to. In other words, by using willpower.

How do we use willpower?

There are a number of things you do during the course of the day that use up willpower and weaken the willpower “muscle”. Being aware of these, and avoiding them where possible, lessens the drain on your willpower and helps to conserve it.

As we saw in the opening story, making decisions uses up willpower. It isn’t only hard decisions such as the judges were making. Every time you make a choice – even simple choices such as what to wear, where to go for lunch, what to cook for dinner – some of your willpower stores are used up. [Achor, p. 166]

Here are some other activities that draw down your supply of willpower:

The issues that arise from a lack of willpower are numerous and perhaps obvious. Consider the powerful politician who spends his day making tough decisions and otherwise depleting willpower. Then in the evening, in a moment of weakness, he engages in an embarrassing and career-ending sexual indiscretion. Other examples are perhaps less dramatic, but more likely to afflict you and me. Missed opportunities. Abandoned goals. Poor eating choices. Lack of healthy activity. Damaged relationships.

Having sufficient willpower enables you to control your impulses, your behaviors, your desires, and your emotions. When you deplete willpower, you lose some of this control and subsequently you are more likely to have negative feelings about yourself.

Fortunately researchers, such as Roy Beaumeister and others, have discovered a number of tools to help us use willpower wisely. One tool, as we’ve discussed, is to limit decisions. Here are three others to add to your toolbox.

Bright lines are rules we put in place for ourselves that help us to resist temptation. They are simple and unambiguous. Their purpose is to produce predictable and consistent results by committing to a specific behavior in advance.

Baumeister explores the use of bright lines in the efforts of alcoholics to stop drinking. If you promise yourself to drink moderately, that isn’t a bright line. It’s a nebulous boundary without any real meaning. It’s difficult to know when you’ve slipped (or slopped) from moderation into over-indulgence. Chances are, you aren’t going to notice when you’ve stopped drinking “moderately” and moved into “excessive”. On the other hand, you can’t miss when you cross a bright line. “I’m not going to drink at the party tonight” is a bright line. You’ll know right away if you break your rule. Same for “I’m not going to drink ever”. [Baumeister, p. 160]

Once you commit to following a bright line rule, you remove the need to go through the decision making process each time you face the situation. By deciding in advance, you strengthen your willpower.

Implementation intentions specify when, where, and how you will take a certain action. They take the form of “When situation x occurs, I will perform response y”. [Gollwitzer, p. 494] For example, when I see my work gloves on Saturday, I will clean out the garage. Or, when I see the candy dish on Paula’s desk at work, I will remember the healthy snack I have at my desk. With implementation intentions, you are committing to respond to a given situation in a specific way. [Gollwitzer, p. 494]

Using implementation intentions to decide in advance how you will act in a specific situation removes the need to deliberate about when and what you will do in the moment the opportunity arises. By forming implementation intentions, you switch from conscious and effortful control of goal-directed behaviors to being prompted automatically by pre-determined cues. You bypass the need to tap in to your willpower stores.

One of the best uses of your limited willpower is to use it to develop new habits of the behaviors you want to consistently practice. I suspect you hardly ever say to yourself, “Let’s see, should I brush my teeth today?” or “Did I take a shower yesterday? Do I need to do it today?” No, these actions have pretty much become automatic because you developed the habits of brushing and bathing many years ago. This concept works for other behaviors as well.

We’ve discussed the mechanics of developing the small habits that lead to big results in other blogs. See for example, “Too Small To Fail” and “Start Small”  for details on how to implement this idea. What habits could you begin building today to make your desired behaviors automatic and remove willpower from the equation?

1. Select 3 decisions you make again and again, such as “What should I wear today?” or “Should I have desert tonight?” and so forth. How could you make these decisions one time and have them permanently in place? (See for example, “Why I Wear A Uniform“.)

2. Consider a bright line rule you can establish to lessen the need for using willpower in that situation. For example, “I don’t eat desert on week nights” or “I don’t use my phone after 7:00 PM”.

3. Think of a behavior you want to strengthen and a trigger you can use to prompt the behavior. Then state your decision as an implementation intention. “When I finish lunch, I’ll take a walk.” “When I stop at a traffic light, I will take 3 deep breaths.”

An Essential And Finite Resource

You may not be making decisions all day long that have a major impact on other peoples’ lives but be assured that you are making countless small decisions that over time will have a major impact on your own life. It pays to be aware of when your willpower source is strong and when it is flagging. If you are aware that your willpower reserve is depleted, perhaps you can postpone the decision until later. But also put these tools to use such that you have willpower to use when it is needed by finding ways to reduce your use of this essential and finite resource. Use your willpower wisely. That is embracing the Excelerated Life!

Excelerated willpower — becoming highly self-regulated — is one step in creating your Excelerated Life, a life of flourishing, of well-being, meaning, and purpose. 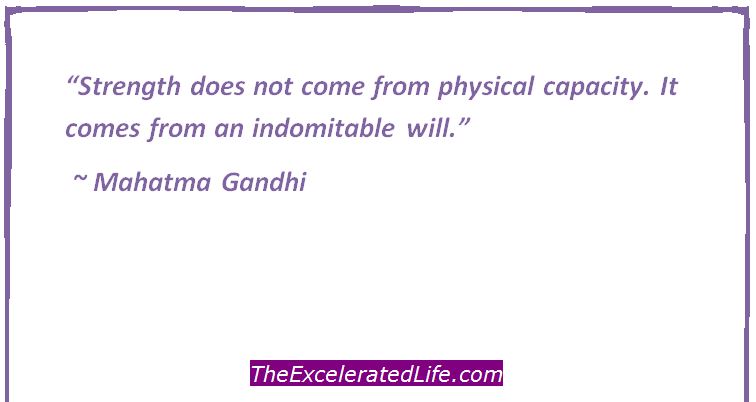 2 Replies to “How To Have Willpower When You Need It”