“Clutter isn’t just the stuff in your closet. It’s anything that gets between you and the life that you want to be living.” ~ Peter Walsh

“Waste lies not in the number of possessions but in the failure to enjoy them.” ~ Joe Dominguez and Vicki Robin, Your Money or Your Life

Do you have “enough”? This is a two-sided question. If you don’t have a reserve of resources in all areas of your life, you spend your time scrambling to get your basic needs met. On the other hand, if you keep amassing resources beyond your reserves, you end up giving most of your time and life source to accumulating.

In Your Money Or Your Life, the late Joe Dominguez and his partner Vicki Robin describe the relationship between money and fulfillment. They include a graph of the “fulfillment curve“. (Dominguez and Robin, 22) In this graph, the x or horizontal axis represents money spent. The y or vertical axis measures fulfillment.

Joe and Vicki have a name for the peak of the curve, where the amount of fulfillment in relationship to the amount of money spent is at its highest. They call the peak “enough”. The interesting thing is that you don’t have to start down the other slope of the curve. You can remain at the peak, at “enough”. “At the peak of the Fulfillment Curve, we have enough. Enough for our survival. Enough comforts. And even enough little ‘luxuries’. We have everything we need; there’s nothing extra to weigh us down, distract or distress us, nothing we’ve bought on time, have never used and are slaving to pay off. Enough is a fearless place. A trusting place. An honest and self-observant place. It’s appreciating and fully enjoying what money brings into your life and yet never purchasing anything that isn’t needed and wanted.” (Dominguez and Robin, 23)

Sometimes we get out of balance, spending like mad in some areas while neglecting other important areas of our lives. I once was shown the closet of an acquaintance I was visiting. I say “closet” but it was actually an extra bedroom that had been converted into a huge walk-in closet. The closet held boxes and boxes of shoes, several shelves with stacks and stacks of jeans and slacks, shelf upon shelf of jewelry, and racks of clothes. Some of the items still had the price tags on them.

Perhaps this represented “enough” to her. But I suspect she was moving down the slippery slope on the backside of the fulfillment curve. And I wondered at the time if she had “enough” in some other areas of her life, would she need so many clothes? (Of course, I was seeing things from my own head. She may be perfectly content and happy.)

Get your needs met.

Having “enough” means having reserves in all areas of your life. Until you get your basic physical and psychological needs met, it is difficult to concentrate on your higher purpose. If all the air were to be suddenly sucked out of the room, you would think about getting air, nothing else. If you hadn’t had anything to drink in several days, you would concentrate on getting water, nothing else. When taking care of your physical needs consumes most of your time, you can’t think about your higher calling.

But when you take steps to get your physical and psychological needs met automatically, you free up time and mental energy to devote to achievement and self-actualization. How do you get your needs met automatically? By building reserves of the things you need. By building and keeping reserves of time, money, supplies, resources, people and love, you are no longer in survival mode. You free up the energy that you spent to survive and use it to grow and thrive. And by building reserves, you know you have “enough”. You don’t have to continue amassing, you can move on to enjoying other things.

Here are some areas to examine to see if you have “enough”. This list isn’t inclusive by any means, but it can get you started. $$s does not necessarily = fulfillment. But having a reserve in every area of your life frees you up for doing the things (including finding meaningful ways to earn a living) that will bring fulfillment. You can use this as a checklist, as affirmations, or as a way to begin thinking of the areas in your life where you need to get and keep a reserve.

Excelerated reserves — building your reserves in all areas — is one step in creating your Excelerated life, a life of well-being, meaning, and purpose. 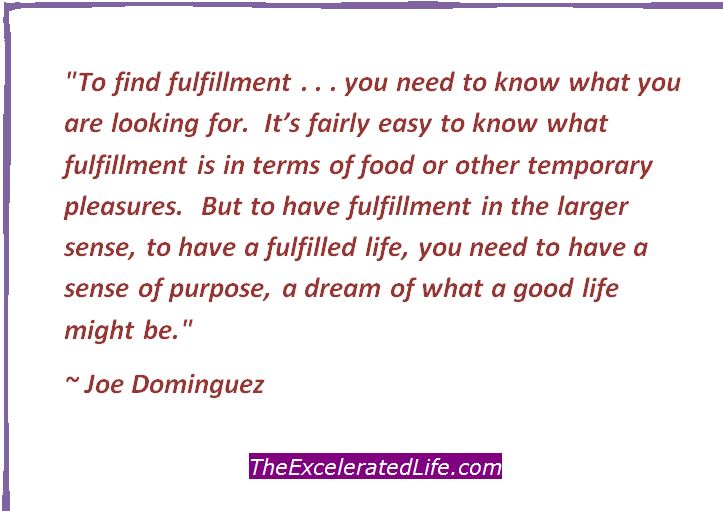