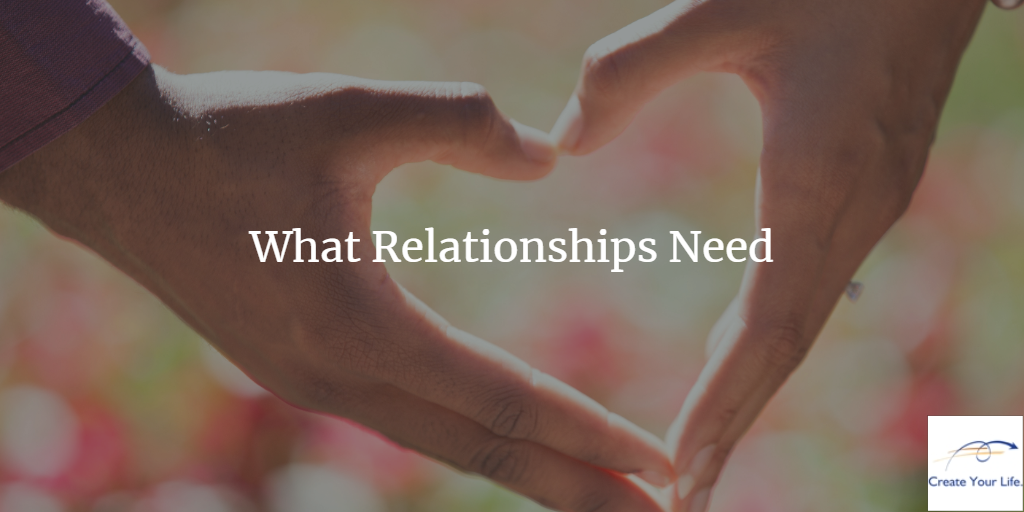 What relationships need are partners who will make investments in the relationship; who seek first to understand, then to be understood; who try to see from the other person’s viewpoint; and who ask how they can help, rather than jumping in with their own solution. These are ways to develop an Excelerated Relationship™ and nurture your ties with others.

Once there was a couple, Billy and Billie. They had been married for nearly 10 years and, while the first few years were wedded bliss, the last few had become pretty rocky. They had two small children, a dog, a cat, a mortgage, and two nearly-new cars with two car payments. They had been a good team at the beginning of their marriage, but the stress of kids and bills and family relations seemed to have taken a toll. Now they spent more time bickering than in nurturing conversation. Billy retreated to working long hours at his job while Billie gave most of her attention to the children, while also working outside the home. Each one spent a lot of time and energy trying to best the other one and win the frequent arguments. They were exhausted, buried in responsibilities at work and home, and beginning to wonder if this was all there was. They didn’t want to split up but they couldn’t see continuing on this treadmill to nowhere. They needed to get clear on what relationships need.

First, let’s differentiate between an investment and an expense.

In financial terms, and being as simple as possible, an investment is designed to put money in your pocket (at least that’s what you hope is the outcome) while an expense takes money out of your pocket. For example, I once heard a new mother say she wanted to “invest in a good camera”. Or perhaps you’ve heard a driver who plans to “invest in new tires”. But . . . these are expenses, not investments.

For an investment, you put resources (time, money, effort) in with the anticipation that they will increase. Think about putting money in an interest-bearing account. But there are other types of investments. Recall the final scenes of “It’s A Wonderful Life”. “. . . what matters most in the darkest hours of George Bailey’s life,” writes Clayton M. Christensen, in How Will You Measure Your Life?, “are the many personal relationships he has invested in along the way. He recognizes, by the end of the film, that though he is poor, his life is rich in friendships.” [Christensen] George Bailey had been investing in his friends and family throughout his life, even while he dreamed of traveling the world having adventures. Those investments gave true meaning to his life.

Billy and Billie realized that what relationships need are small investments of time, energy, and love made consistently, over time, again and again.

When you face a challenging period in a relationship, try a change of attitude. Instead of laying blame or feeling put upon, be a researcher of the relationship. As Oliver Burkeman explains in Four Thousand Weeks, deliberately adopt “an attitude of curiosity, in which your goal isn’t to achieve any particular outcome, or successfully explain your position.” [Burkeman] Instead, try putting yourself in the other person’s shoes. Ask yourself, “I wonder what the other person thinks? feels? sees?”

Before you argue for your position, understand the other perspectives. (There are usually more than one or two.) “In almost every instance,” says James E. Ryan in Wait, What?, “it is better to ask clarifying questions first and to argue second.” [Ryan]

What relationships need, Billie and Billy decided, was more understanding and less being the “winner”.

The two were familiar with Stephen Covey’s work, and they remembered the Fifth Habit: Seek first to understand, then to be understood. [Covey] This requires one to cultivate the habit and the skill of listening. I once heard Brian Tracy say that most people don’t listen, they wait. They’re simply waiting till they can jump in and take over the conversation. This is not seeking first to understand.

Use these techniques to improve your listening skills. Practice them till they become your own.

“Cultivating the habit of understanding first and making judgments second will also help you avoid pointless conflicts and create deeper connections with those around you.” [Ryan] Of course, seeking first to understand, then to be understood, requires that, once you are sure you understand the other person’s viewpoint, you are then able to clearly state your own. This is how you improve and strengthen communication in a relationship.

Billy and Billie began to understand that what relationships need is clear, open, and honest communication and they resolved to seek to understand each other.

Research shows that when you put yourself in another’s place and see from their vantage point, you can better understand the other’s actions and motives. You are each seeing the situation from your unique perspective. But neither of you sees the entire picture. Don’t get so entrenched in your position that you forget there are other ways to tell the story.

Frequently, we approach our relationships “thinking about what we want rather than what is important to the other person. Changing your perspective is a powerful way to deepen your relationships.” [Christensen] Step back and see the situation from the other person’s point of view. Then, help them see from your viewpoint. The result is not compromise but an enlarging of both peoples’ vision.

It began to be apparent to Billie and Billy that they could improve their connection by putting themselves in each other’s place and getting a clearer picture of the other’s point of view.

“’How can I help?’ is an essential question. It is the question that forms the base of all good relationships. It is a question that signals that you care. It signals a willingness to help. But it also signals respect, humility, and the likelihood that, in the end, it is you who will be helped just as much.” [Ryan]

Sometimes understanding another person’s viewpoint is enough, at that time, to improve and deepen the relationship. Sometimes, however, more is needed. When you ask “How can I help?”, “you are asking, with humility, for direction.” [Ryan] You aren’t trying to fix anything based on your own understanding. Instead, you are seeking to understand what constitutes a solution for the other. This puts you on a more equal footing. Instead of riding in as the all-knowing expert with a pat answer, “How can I help?” makes you a collaborator in finding a resolution.

“It’s easy for any of us to make assumptions about what our spouse might want, rather than work hard to understand the job to be done in our spouse’s life.” [Christensen] Billy, who had been quick with advice and directives about what Billie should be doing, decided that what relationships need are true partners who are willing to ask: “how can I help?”

These are some of the things vibrant, strong, deepening relationships need.

Billie and Billy were committed to their relationship — they had simply lost their focus due to the demands of jobs and raising a family. Once they stepped back and took the time to really see what was happening, they were able to make important changes. They learned that what relationships need are partners who will make investments in the relationship; who seek first to understand, then to be understood; who try to see from the other person’s viewpoint; and who ask how they can help, rather than jumping in with their own solution. They resolved to make these changes on their way to developing an Excelerated Relationship™, nurturing their ties with each other.

Look at your important relationships. Is there one or more areas where you could make improvements? What is one small step you could initiate today? That’s embracing your Excelerated Life™!

Developing Excelerated Relationships™ — nurturing ties to other people — is one step in creating your Excelerated Life™, a life of flourishing and well-being, and a life of meaning, purpose, and service.

Have you discovered a useful technique that has allowed you to deepen a relationship?
Share your thoughts by leaving a comment below.